- March 06, 2010
I've recently been studying my fine collection of early Pony Club Annuals, and what a treasure trove they've been.

When I was young, my mother bought me a magazine every week which was full of information - historical pieces, scientific pieces, and the thing I remember best, and which I looked forward to most: "This week's beautiful picture". Despite long discussions, neither Mum not I can remember what the magazine was actually called. I'm fairly certain it wasn't Look and Learn, but it could well have been The World of Wonder. That title set off a little bit of a cringe at its worthiness, and I do remember being embarrassed about admitting what I read at the time, so I wonder if that means it's it? Just not sure. I think I might have to scour Ebay and see if I can buy a copy, and will then have to reassure OH that no, this is not going to be another field of study; it's just to see if that's what it was, and no I am not going to fill the house with yet more runs of ancient magazines. No, really. 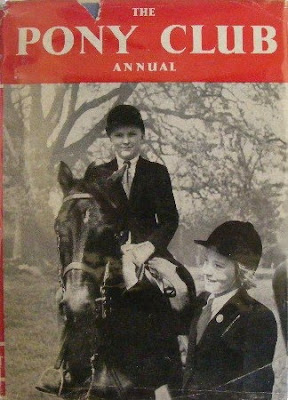 Anyway, it's the didacticism of those magazines; that urge to teach and inspire that was there in the first Pony Club Annual. I don't think that's a bad thing: I find these articles, from the picture feature on Riding Habits of a Hundred Years Ago, to The Spanish Riding School at Vienna, via John Cowper and The Diverting History of John Gilpin, fascinating. I think it's great that the Pony Club Annual didn't take a riding and pony care is all we do view, but tried to show its readers the whole scope of the horsy world: how the horse affected history; how we have affected the horse; its portrayal through the centuries and so on.
The early Pony Club Annuals really were things of beauty: the best of the current crop of equine illustrators were commissioned to decorate them. The first annual alone had contributions from Michael Lyne, Joan Wanklyn, Cecil G Trew, Sheila Rose, Peter Biegel, Maurice Tulloch and Marcia Lane Foster.
I just can't see a similar mixture succeeding now, alas. I can't answer for Pony Magazine today, but the general range of girl's magazines available now makes me cringe: daughter was not allowed when she was younger any of the be-your-own-Princess titles, despite her (completely truthful) claims that all her friends had them. Just couldn't do it. It's for the same reason that I disliked the Katie Price pony books and their focus on their protagonists' looks so much: yes, that's going to come. They're going to be obsessed about their looks, but please, spare them for as long as possible.
I bought her Aquila, in the hope that she might be inspired to love facts and finding out stuff as much as her mother. She enjoyed the magazine, but it has of course been superseded by teen magazines. I knew that was going to come, but I think Aquila helped me fight a valiant rearguard action until an in depth feature on what mascara was best did actually become the focus of her world, at least temporarily.
I've written more on Pony Club Annuals in their early years here.

Jackie said…
I had World of Wonder and I am sure you are right, there was one, huge spectacular picture each week.
I love the picture from the Annual, fond memories of using the elastic which was the one vague hope of keeping your hat on to tuck under your hairnet!
I always say 'but we are still alive' and my husband says 'only the ones of you who are still alive are available for comment, though.'
6 March 2010 at 09:10

Jane Badger said…
Thanks Jackie - I have found a few World of Wonders on ebay so will try and get hold of one.

Did you ever have to hang upside down to check if your hat fitted? I can remember doing this, and also careering round in other people's hats which were keener on dipping over my eyes than staying put!
6 March 2010 at 11:00

Anonymous said…
This comment has been removed by a blog administrator.
6 March 2010 at 11:02

Val said…
fascinating...I never had the pony club annuals but would've loved them... I read "The Right way to Ride a horse" and "the Horse keepers encyclopedia" until I knew them backwards...lol
My Brother had "Treasure" , then "Look and Learn", then "World of Wonder" and we used to share ...not so sure What he thought of my "Judy" comic or my Sister's "Bunty" though

I bought my Mum a Rainbow annual from the twenties (ebay) as she had fond memories of loving Tiger Tim
http://www.britishcomics.com/Rainbow/index.htm
6 March 2010 at 18:13