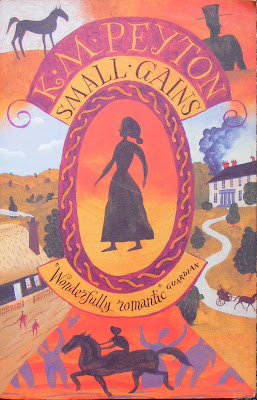 This pair of books are set at the beginning of the 19th century, and are the story of Clara Garland, her family, and her Norfolk Trotter horses. It's good to see the Trotters making an appearance: horses in historical novels aren't often differentiated into breeds, but K M Peyton takes you into a rural world where matches between trotters are huge social events, and the owner of a good horse can make a lot of money. (The breed is alas now extinct, though was used to produce the Hackney and the American Standardbred.) The horses, as ever, are wonderfully drawn, and I'd love to see a return of the breed. The ability to trot up to 17 miles in an hour would be very handy if we ever have to say farewell to the car. 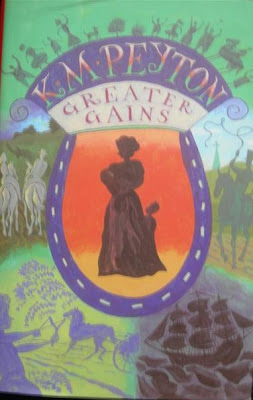 K M Peyton specialises in feisty heroines, and Clara is one of the best of them: I enjoyed the way she keeps her family going by sheer determination. In passing, I wonder what the story would have been like if it had been told from the point of view of one of the weaker characters in the book, like Margaret, Clara's sister. K M Peyton's heroines are always blessed with plenty of oomph, which I like: there's nothing wrong with a plot showing a strong woman, but it would be interesting to see how the author handled a less self assured character as the pivot of the plot.

Small Gains is an excellent read, taking the reader back to a time when rural life was often brutish in the extreme, and women had to make difficult choices to survive. Clara's dilemmas in that book are entirely believable. The plot of both books turns on the difficult choices Clara has to make: without spoiling the stories completely, I can sympathise with her first choice, but I have a little more difficulty believing in the second, on which the narrative of Greater Gains turns, and more still believing in the neat ending of the second book, though it is exactly what you want to happen. This makes Greater Gains a less satisfying read, though it is still excellent on period detail, and in particular on the unwritten rules women had to obey at that time.
K M Peyton does write a good romantic hero too. The wonderfully named Prosper Mayes is up there with Jonathan Meredith and Peter.

Juxtabook said…
I loved K M Peyton when I was a kid. Haven't read any for years till I re-read The Team this summer. I thoroughly enjoyed it and must read more.
10 January 2010 at 14:47