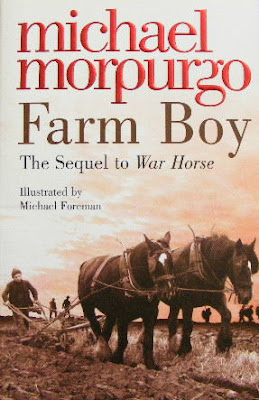 This is another book I've had for ages; in fact since I went to see War Horse when it was still at the National. Farm Boy is badged as a sequel to War Horse, but it is only in the loosest sense. Joey and Albert's histories are updated, but by Albert's son, looking back from decades later.
Having read War Horse, I was puzzled by a couple of things. The grandfather tells his grandson Joey's history. Joey is indeed won at the toss of a coin in No Man's Land, as Farm Boy says, but it is a Welsh soldier who wins him, not Albert, who only comes across Joey when he is brought into the Veterinary Corps for treatment. Albert bought Joey back from the Army after they were going to sell him and the other army horses for meat; using all his savings to do so, says his son. In War Horse, what actually happens is that the soldiers all band together to try and save Joey by buying him at auction, but they fail. Joey is bought in the end by a Frenchman who had Joey on his farm at the beginning of the war, and he sells Joey back to Albert for a penny.
I can't believe Michael Morpurgo forgot what had happened in War Horse, so I wonder if the story, over the years, changed in Albert's mind so that in the end it was what Albert wanted to happen that mattered, not the truth. If you read it that way, there's a great poignancy to it: after all Albert did for Joey, shielding him from his father's rages, and nursing him back from his dreadful war-induced frailty, he still wished he'd done more, and that he had been everything to the horse.
Joey's story once he returns from the war is as you would expect: he was, after all, a plough horse. The post war period saw the introduction of mechanisation to farms, and this book describes what happens as the tractor takes over. The book does a good job of showing the villagers' mixed feelings about this: the great pull of the old ways and the horses themselves, compared with the undoubted labour saving of ploughing with a tractor.
This book certainly bears a re-reading. I read it at first at the gallop, picking up only on what I thought were inconsistencies between this book and War Horse, but on a second reading, I began to appreciate what Michael Morpurgo was saying about the deep pull farming can have; even on those brought up in towns, and on the relationship between different generations. The boy has far more in common with his grandfather than his urban parents, and their changing relationship is the great strength of the book.
The grandfather is unable to read, and is deeply ashamed about it, and offers to help his grandson with his plans to visit Australia, in exchange for being taught to read. Having had my own small share of Defra forms, I did wonder in passing how the grandfather managed for 20 years without being able to fill in the fifty feet of Defra paperwork that would have washed into the farmhouse every year, but it was only a passing blip: the portrayal of the struggle an adult has to learn to read was utterly convincing.
The illustrations by Michael Foreman convey rural charm; the whole book is full of it. It portrays a rural idyll which alas doesn't exist any more, if it ever did: I suspect many, many farmers would not be able to say, as the grandson does about farming "It's all I hoped it would be, and more," but it's the relationship between grandfather and grandson that is the most important part of this book, and it is so tenderly done, it's a joy.
Review