- January 04, 2010
A very belated Happy New Year: my resolution this year is to try and get down the books to be reviewed pile. I think the only way I am going to manage this is to review several books at a time, and not go on at quite my usual length.

So, here are the first reviews of this year:

Diane Lee Wilson writes historical horse books, and does it very well. Like her earlier novel, I Rode a Horse of Milk White Jade, Firehorse has a feisty heroine pushing the boundaries of what is expected of women. Rachel is forced to move to Boston from Wesleydale, Illinois, which is the American equivalent of moving to London from Piddletrenthide. Rachel moves, but her horse Peaches does not move with her. Life in Boston is cloistered, smelly and seemingly completely without hope, until Rachel meets the firehorse of the title: The Governor's Girl, who has been terribly burned in a fire. Rachel decides to try and save the horse, but has her work cut out. Not only are the horse's injuries terrible (this is not a book to read if you are squeamish) but she has a fearsome temper. The horse is gradually nursed back to health, which fuels Rachel's desire is to become a vet. Not only society, but Rachel's father, are vehemently against the idea, and Rachel's struggle to fulfil her dream is even harder than that to cure her horse.
The book provides a fascinating insight into the beginnings of feminism in America, as well as the workings of the fire service and the Great Fire of Boston itself. I had heard nothing about this at all (my own great fires being strictly of the London variety) and if you like lots of historical background, a rattling good story and believable characters, try this book. It's out later this year in paperback, but is still available in hardback. 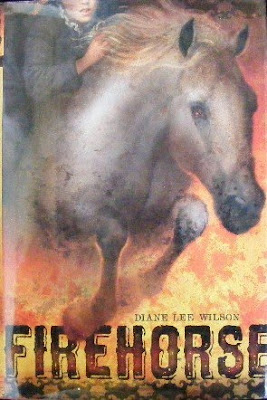 Kate Thompson: Annan Water
Bodley Head, London, 2004, £9.89 (hb), £5.39 (pb)
The second book in this section of reviews is Kate Thompson's Annan Water. There's an attractive tension to the author of the horsy novel in the situation of the child of horse dealing parents; constantly used to improve and show off horses, and constantly finding them sold on, however keen on them they are. K M Peyton famously used this tension in Fly-by-Night, and Kate Thompson's hero, Michael, is another child of dealing parents. His sister has been killed by a pony she was bringing on, and Michael lives in a world which is emotionally barren. His parents have flung themselves even further into their dealing business, and Michael thinks them no longer a family, just a business. Michael hates school and the only faint light on his horizon is the girl Annie. 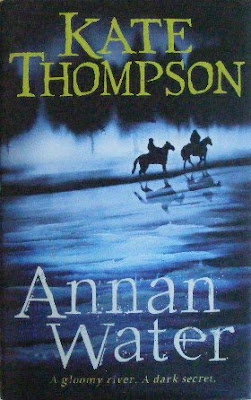 It seems as if the relationship between the two of them will lead them both out of their bleak worlds, but nothing is simple in this novel. The relationship is tightly written, and the action draws you in, but this is ultimately not a story of hope (unless you read the ending rather differently to me). Nevertheless, I'm glad I read it.