- January 11, 2010
Another post done at the gallop to try and get the to-be-reviewed pile down a bit; not that either of these two really merit a quick review, as they're both excellent reads.
Kim Ablon Whitney: The Perfect Distance
Knopf, , New York, 2007 (pb) £3.74
Kim Ablon Whitney's website 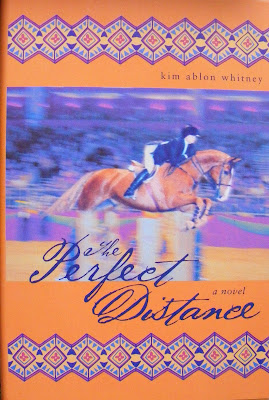 It's very noticeable, when you look at Kim Ablon Whitney's website, that this is the only horsy title she's written. If she lived in the UK, her chances of publishing a standalone story would be virtually zero; and to publish it as a hardback (which it was originally) completely non-existent. Thank goodness for American publishers, willing to take a chance.
This is an excellent read. Granted, it meets some horse story conventions - girl at the bottom of her particular equine heap wants to be the best - but it doesn't take the easy way out by writing in cardboard, bitchy opposition, and a fairytale rise to stardom. Francie Martinez lives with her father at a top training stables, where pupils are trained for the Maclay Finals. (I don't think we have anything similar in the UK: this is a competition for junior riders in which competitors are judged on how well they jump a course, as well as how many jumping faults they get. Click here for some footage from a recent final.) Francie is a talented rider, but she has more of a battle than many of her competitors: she is half Mexican, and so faces sneering contempt for her background; her father manages the stables where she rides, she doesn't own her own horse, and she lacks confidence.
Her trainer, whose approval she longs for, is fixated on the one rider he thinks will win. His training methods are bullying to say the least, and I liked the way the author handled Francie's gradual realisation that she doesn't have to have his approval. Francie does change, and grow up, in this book, and if a portrait of an intelligent teenager coming to terms with her world is something you like, this is the book for you.
Diane Lee Wilson: Black Storm Comin'
Margaret McElderry, £9.78 (hb) £3.65 (pb) 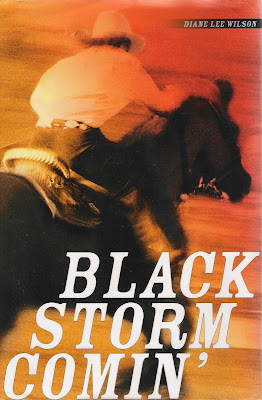 Another horse story tackling racism is Diane Lee Wilson's Black Storm Comin', again, an American book. On a quick search through my memory of modern British pony books I've read recently, I can't think of one offhand which tackles racism in the way these books do: there are nods to multi-culturalism with Asian and black characters, but that's about it. Please let me know if you have read any books which make an effort to look at the issue.
Black Storm Comin' is another historical horse story (I do like these, and have just found a Vian Smith one which delves back into the stone age, about which more anon), and this is about Colton, left on the wrong side of the Sierra Nevada Mountains with his sisters and his sick mother after they are deserted by his father. The only way Colton can manage to earn the money to pay for a doctor, as well as get his black mother's freedom papers, is to try and ride for the Pony Express. The chilling advertisement for riders says: "Young, skinny, wiry fellows. Not over eighteen. Must be expert riders. Willing to risk death daily. Orphans preferred."
Even given the stringent list of conditions, it still wasn't easy to be taken on as a rider, and Colton struggles. This author specialises in portraits of resourceful children taking on a world restricted in one way or another: Colton suffers racism, as although he looks white, his mother was black, and his petrified anxiety less his ancestry be discovered lends the book much of its energy. Colton though has the inner fire to win through in the end. He's a character with plenty to make you like him, and the historical background is fascinating to a Brit whose knowledge of the Pony Express was shaky at best.
Review