Janet Rising: The Word on the Yard (The Pony Whisperer 1) 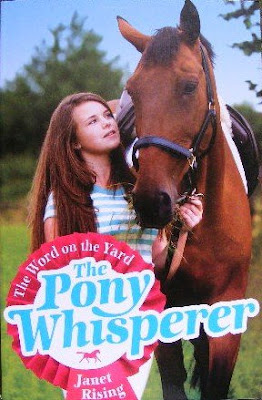 I had a bit of time to spare before I caught the train back from Edinburgh recently, so I wandered into Waterstones. I already had a couple of charity shop finds to read - Dervla Murphy’s Through Siberia by Accident, as well as, lick lips, Sherbatov’s The Arabian Horse in case I finished that, so I wasn’t short of reading matter. There’s always something though in the publishing world that slips you by , and in Waterstones I found the first of the The Pony Whisperer series by Janet Rising. Normally I know what’s coming out, but this one completely sneaked under my radar: probably because the most recent Pony Magazine I’ve read recently has been from 1969. Janet Rising, the author, is the editor of Pony Magazine (though if she’s the same person, she also contributed a couple of short stories to the Annual in the 1970s), and I imagine the book’s been promoted to death in the current mag.

I must admit I went into this book with all my prejudices flying. I’m not hugely keen on the horse whisperer genre, where a girl (and it always is a girl – where is Henry the Horse Whisperer?) can do things with horses that absolutely no one else can, and all done in accordance with the latest fashion in natural horsemanship. Why do we need another? I thought. Isn’t Heartland’s Amy enough? And Pippa’s covered the younger generation.

To be fair, pony books have always reflected current thinking in the horsy world. The Pullein-Thompsons promoted two things which no one would even begin to quibble with now: the forward seat and dressage, but at the time opinion was not always for them. Nevertheless, I was expecting nothing much from this book.

So, I didn’t crack and read it on the train. Dervla Murphy, interspersed with a lot of looking out of the window at the glorious Northumberland coast, and wondering quite why the couple sitting opposite me seemed to think my feet were the best place to put their parcel, won out.

A couple of days after I got back, I picked the book up. The heroine, Pia, has divorced parents, and she and her mother have had to move. Drummer, Pia’s pony, has had to move too, and has a place in a new livery yard. Pia immediately gets on the wrong side of the aptly named Cat, the yard’s nasty character, by refusing to move from the stable she’s been allocated. It turns out that this prime stable spot is next door to the yard heart throb, James. When Pia takes Drummer out for a ride, she falls off, and spots a tiny statue of a woman and a horse in the grass. When she picks it up she finds she can hear ponies talk.

I perked up at this, because it is soon fairly obvious that there’s not going to be any mooning about with poor damaged horses. Drummer has a voice of his own, and so do the other ponies. Drummer is more likely to be thinking something uncomplimentary about Pia than misty thoughts of love for his mistress. Pia’s “gift” instantly disappears the moment she puts the statue down, and this of course leads to all sorts of lovely plot complications. Not least of these is when Pia gets not one, but two tv programmes devoted to her and her gift.

I liked this book – it’s written with a lot of verve, and I think Janet Rising’s captured the teenage voice pretty well. It’s not quite Georgia Nicholson (which is perhaps just as well though I’d like to see what Louise Rennison and Georgia would make of the pony world. I’d recommend a good sports bra, Georgia, before you start) – but there’s something of the same energy. I liked Pia’s squirming as her mother starts dating again, and the real toe-crunching horror when mother overdoes the pre-tv show hospitality. The ponies’ voices are authentic, and it’s a good, fun read: some bits made me laugh out loud and it’s a long time since a present day pony book did that. I’m looking forward to the next book. It is, of course, part of a series. Go, Janet Rising, go.

A few words about the cover – Drummer is described in the book as about 14hh, and the animal on the front is a HORSE – not a pony. It’s at least 16 hh. Yes, they’ve got the colour right but whoever was responsible for the cover only had to read as far as page 3 to find a description. And if that was my daughter on the front, I’d tell her to tie her hair back. I bet she wouldn’t listen though.
Review