- July 13, 2009
By special request from Vanessa, because they made her laugh - here are the other Fancy Dress photos from the Ponies of Britain Magazine, 1970. I think she could probably do with a laugh, after all the work at the Fidra Gallery (which now I've seen it I can tell you is fantastic - well, well worth a visit) and having a guest, ie me, over the weekend too.

I'm afraid the cream has already been blogged, but here are the rest:

Mrs E H Parsons - I'm assuming this is the pony book author E H Parsons - and yes, she did, she really did, sew every button on herself. The pony is Garth Remus, one of her famous pair of New Forest ponies, once lent to the Queen. For this effort (the costume I mean, not the lending) she was Very Highly Commended. 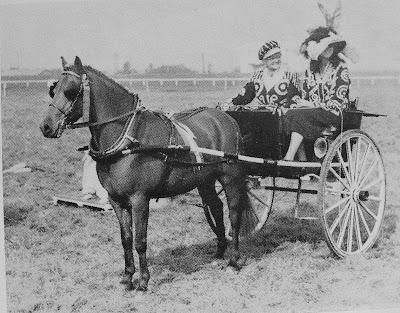 This is the Millfields Riding School, Newmarket - "yet another winner .... with a Tyrolean group complete with genuine imported Hafflinger ponies and the whole party in authentic national costume." They won the Winifred Spooner Challenge Cup. Not a hard hat among them, I don't suppose. I think health + safety would have quite a lot to say, and imagine the risk assessment you'd have to do before you dare enter:

Look on it well - you'll never see its like again.

Paul and William Neaverson won 3rd prize with their cart and ciderbarrels. I do like the moustache. 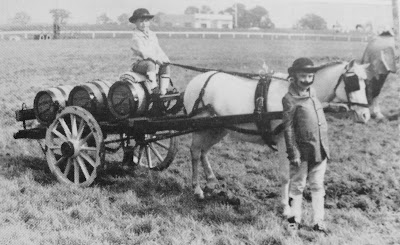 This next lot are from the Summer 1970 show. Millfields Riding School were in the ribbons again: reserve for the Winifred Spooner Challenge Trophy with their "pack of cards". 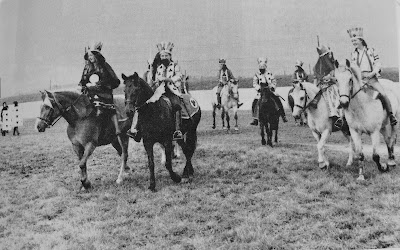 Below is Mrs J Beaton of Yorkshire as a Zulu Warrior. Her horse was one of those who took a dim view of the mammoth. Poor beastie still looks rather uncomfortable. 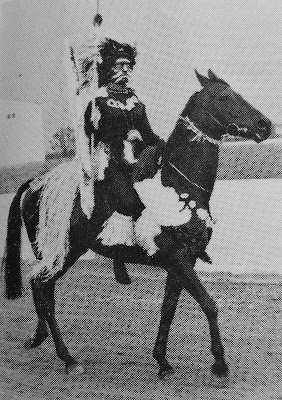 "As beautiful as a Butterfly, as proud as a Queen, was pretty Polly Perkins from Paddington Green" - an unknown competitor. I would have thought those wings would have given the more nervous equine competitor pause for thought too, but nothing is mentioned. After the horror that was the mammoth presumably everything else paled into insignificance. 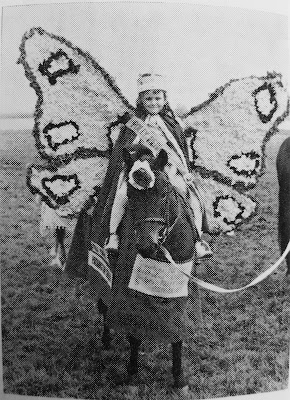 There was a caveman motif in the Summer 1970 show: here's another lot; these ones from Mrs M R Reid, showing Peterborough's cavemen. The exhibit was complete with woad, and a goat, which was being milked when the photograph was taken. 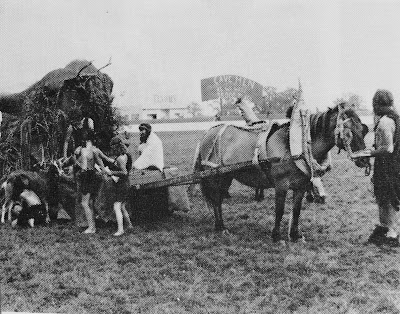 And that's it, I'm afraid. No more fancy dress pics. Or at least not until I unearth a few more of these fascinating historical documents.
The Horse - Fancy Dress

Jane Badger said…
Thanks both - I hope you like the next post. I'm just amazed at the time and trouble people were prepared to take then. It's really impressive. I wonder if they'd get such a good turn out if fancy dress classes were run now?
20 July 2009 at 09:39

Jackie said…
Well, to my horror, we witnessed some gothic affair win the quadrille of the year last year at Olympia, and not a hard hat among them, either.
Among the reasons I shall not be taking my children this year!
19 August 2009 at 07:09

Jane Badger said…
I saw the finale of the Quadrille, and alas can't remember anything about their costume apart from the feathers! (If that was actually the one that won....) It looks then like we won't see you at Olympia, as I'm hoping we'll be there again.
24 August 2009 at 12:45