- May 29, 2009
As you have probably realised by now, as a child, I was pony-obsessed. My favourite monthly reading was Pony Magazine, which I read cover to cover: every advert; every word. I recently bought a set of Pony Magazines from the 1960s. I actually took Pony in the 1970s, but there wasn’t a lot of difference between the decades in the style and contents of the magazine.

One advert which took me instantly back to that state of childhood wanting; longing for things I couldn’t have, and trying to work out what I could do to afford them, was for Jacatex riding clothes. How I loved that ad. The Pat hacking jacket; the Pat riding mac and the Pat jodhpurs. Who was Pat? Was there a Pat? Or were the clothes just something that was off pat? It was never explained. Jacatex adverts didn’t change much over the years. The 1969 ad below is the same one that I remember from the 1970s, a cheerful pony girl in immaculate clothes. I don’t know whether Jacatex ever did haul themselves into the modern age and replace their advertising: the fact that they no longer seem to exist would suggest not.

That style of advertising, using a commercial artist, was something that Jacatex’s main competitors used too. 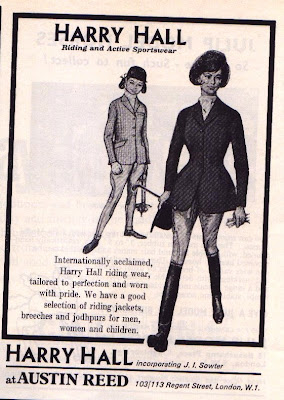 The girl looks alright, but the woman is a bit of an anatomical oddity. Change was on the way, however. Both Harry Hall and Caldene embraced the slightly breathy advertising style of the 1960s. They used actual photographs and, from the look of it, the services of an advertising agency. Their adverts are a world away from Jacatex’s: and this ability to adapt has preserved Caldene and Harry Hall, both still going strong, but not, alas, Jacatex. 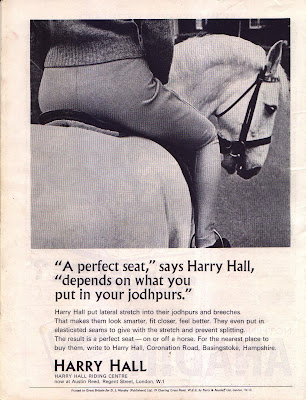 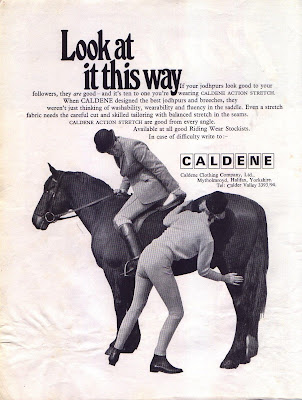 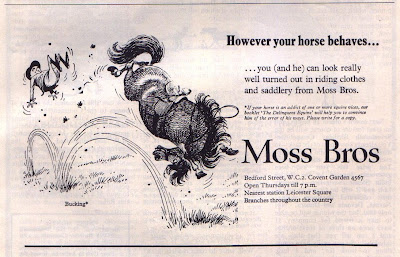 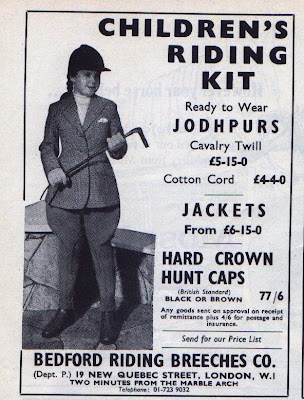 I can say from bitter personal experience that these jodphurs were extraordinarily hard-wearing. My first ever pair of jodphurs were not, alas, a Jill Crewe like experience of delight: my riding teacher kept a stock of second hand clothes, and when my mother decided that my sister and I weren’t going to give up riding in a hurry, we were taken in to, oh bliss of blisses, buy some jodphurs. There was nothing second hand to fit my sister, so she was ordered a pair, but there was something to fit me: a khaki pair of elephant ears. I can remember now how it felt as my dream of svelte fitted jodphurs crumpled as Mrs Holton held up that baggy pair of elephant ears. She must have had them for years, and probably couldn’t believe her luck as my mother said “They’ll do for Jane.” Oh woe, oh woe, oh misery. If everyone else had been wearing them, I would have been as delighted as Jill was when she got hers, but they weren’t. Stretch fabric was now the thing, and jodphurs were fitted.

There were of course children for whom price was not an issue back in the halcyon days of Pony, and they could pay 8 and a half guineas for made to measure riding trousers from Bernard Weatherill Ltd. 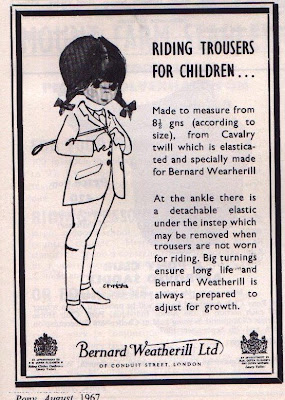 It’s very noticeable that the riding hat doesn’t get much of a look in. In some issues, there was just a single, solitary advertisement, taking up a quarter of a page. Health and Safety wasn’t quite the thing that it was now, and Pony featured many photographs of readers cheerfully hatless. The one attempt Pony did make in the 1960s to persuade riders that a hat was a good idea was via the Percy and Allsorts League. Percy and Allsorts were a pony and a dog who ran a club for readers. There were six rules, and wearing a riding hat made it in at number five, though even then it wasn’t compulsory: “Members will try to remember always to wear a hat or cap when riding.” 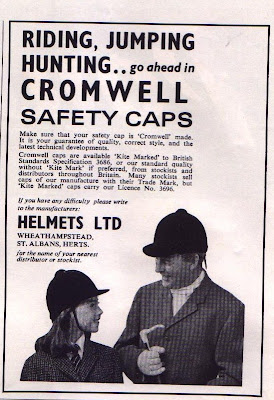 Although readers were allowed a cheerful insouciance towards their safety, they certainly weren’t when it came to colour choice in their riding wear. In desperation, Jacatex in one advertisement describe their jodphurs as “a lovely shade of putty.” Yes, well. Other colours you could have had were biscuit, light putty, fawn, or as a special order, canary (this was only for the show ring), but basically, it was any colour as long as it’s beige. Now that beige is restricted to competitions, jodphurs seem to be any colour but.

Anonymous said…
Lovely! I took Pony Magazine in the late 70s and early 80s and would collect earlier ones when I found them. Goodness knows where they went. Will have to try not to buy Horse & Hound in Sainsburys this morning now!
30 May 2009 at 09:35

Jane Badger said…
Sorry lyzzy - I do take Horse and Hound and that's quite a different thing now from in the 1970s, but I will try and stop myself from enticing you to buy it.

Mutterings and Meanderings said…
What a fab piece. I remember ordering a pair of boots from Pony in the 1980s that were 'cash on delivery'. Does anyone do that now?
3 June 2009 at 21:23

Jane Badger said…
Yes, I'd noticed the CoD too! I sometimes see it on ebay, but not otherwise. I don't even know how CoD worked. Did the postman collect the dosh? Or was everything delivered by a van driver who had to collect money too?
4 June 2009 at 23:02

Rhna Lee said…
I came across this post while searching for information on Pony Magazine from the late 60's and early 70's when I subscribed.
I am researching my Family History and am compiling a file on my life.In 1969 and 1970 I was one of the runners up in the Junior section of the Harry Hall Drawing Competition in 'Pony' and in 1971 I won first prize. I have kept all the correspondance from Pony and Austin Reed, including photos of the presentation at the Horse of the Year Show at Wembley. This was done by one of the male show jumpers and I never recorded and can't remember who he was!He looked very dishy from the photos but I was too young to appreciate it at the time being the tender age of 13.I thought I might find a photo on the internet which would give me his identity but no luck so far.
Your post brought back so many memories one of which was the 'Julip Model Horses' advertised in 'Pony'. Flexible rubber toy horses which you could buy. They came in various breeds and colours you could also buy riders and various accesories. I had a strawberry roan pony and rider and I remember a dinky little hay net and bridle in particular. I recall my dad made me a fab stable and tack room.
14 June 2009 at 00:28

Anonymous said…
The 'Pat that Jackatex wouold be refering to would have been Pat Smythe - it was definately here era of fame.

I saved for ages for the 'Pat' Jacket and Jodphurs - they arrived and were very unflattering but it meant I could go to shows and look the part - I was thrilled.
3 October 2011 at 02:40

Jane Badger said…
Yes, of course it is. You know that has never, ever occurred to me. Thank you for shedding light on my life!

I did always wonder if the actual clothes were quite as glamorous as the ad made them appear...
3 October 2011 at 17:16

Anonymous said…
I used to have Pony Magaine and I had published a poem Gypsy, to the tune of Acker Bilks Stranger on the Shore. Must have been in the 50's or 60's. A longshot but who knows someone must have a copy somewhere. Published under the name Ann Horten.
Acker Bilk's death made me think of this. Thanks Ann

Jane Badger said…
That actually does ring a bell. If you can narrow down the date a bit more it would be a help. I do have many Pony magazines from that era but a bit of a closer idea for the date would narrow down the search a bit!
4 November 2014 at 08:53

Anonymous said…
Hi Jane,
Thanks for that, don't worry too much, maybe there was a competition to write poetry to Stranger on the Shore, can't remember that far back just know I had mine published. Thanks for looking anyway, take care..................Ann
4 November 2014 at 17:14

Anonymous said…
HI Jane
Love your blog on riding clothes. I recall drooling over Pat coats etc and the Harry Hall adverts. Even more recent ones are eye candy. Photo of I think it was supposed to be Ginny Lorriston Clarke hanging up a bridle, shot from behind and tastefully side lit is very elegant! Getting to the elephant ear jodhs of bygone days. I think the ears were purposeful in that they gave one more 'room' across the derrière and upper legs . Speaking as a seamstress and pattern drafter, y
ou need more 'ease' (both width and length) in the seat when you sit astride otherwise the breeches or jodhs would bind and ride up. Before stretch fabric was available, my mother tried to sew breeches for me out of non stretch fabric. They didn't have the elephant ears and needless to say were rather unsuccessful. I think I wore them once during which the side seams ripped open. Post note,, I still love the look of them and have source out a pattern to make a pair,, now I just need to find some beford cord!
31 August 2017 at 08:51