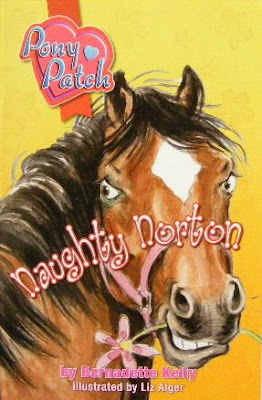 I've had two of Bernadette Kelly's books for a while - the other is If Wishes Were Horses, which is the first in her Riding High series, for older readers. I'd put off reviewing them firstly because I am really, really slow at getting down the review pile, and secondly because they were only available in Australia, and therefore cost me a bomb to get over here, and was it, I thought, worth it?
I'm not so sure about If Wishes Were Horses, about which more next week, but Naughty Norton is due to be published in the UK, albeit in a library binding, which does make it a bit more pricey. However, this is one series I'd buy like a shot if I still had children of the right age (ages 4 up as a to be read to, and 7 up for a read on your own).
This book has a straightforward pantomime theme: Molly, Norton's owner, is convinced he is the most wonderful, and best behaved, pony in the world. The story, and the drawings (an excellent job by Liz Alger), make it perfectly plain that Molly is blinded by love. Everytime Molly says how wonderful Norton is, I wanted to shout "Oh no he isn't!" The book is taken up with Molly's attempts to catch Norton to have a ride, but by the time she actually manages it, it's dark. 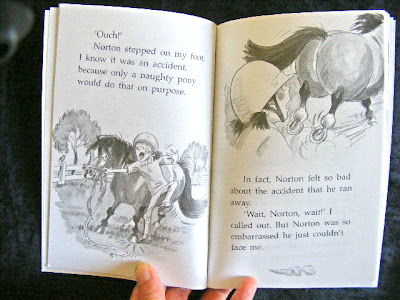 This book is, I think, the first example of the Shrek formula applied to a pony book: it has references adults are going to get but which will sail over infant readers' heads. Bernadette Kelly has a sly dig at the current fad for natural horsemanship - a much disputed method of working with horses involving understanding why they do what they do. If you want to start a big, fat fight on a horsy forum, try posting a thread on natural horsemanship.
Molly may well have read all the books, but Norton certainly hasn't. Molly may well be convinced that Norton is a flight animal who will flee at the merest hint of danger, but she hasn't quite cottoned on to the fact that if your pony is not afraid of you at all, he can run away for quite different reasons.
The theme of girls devoted to really quite horrible animals is not new: Norton is out of the same stable as Thelwell's Kipper, the beyond evil Shetland. It's tempting to laugh more at Molly than with her, though if I'm honest with myself, I have certainly been completely devoted to ponies who were frankly vile, though of course as adults none of us, of course, are ever blinded to our horse's faults.
This is a book that will succeed with its adult readers as well as with children. It's good to see humour, which isn't always a natural partner with the pony book in a book for such young children, so well done Bernadette Kelly.
Review

Bernadette said…
Thanks for reading my book, Jane. The Pony Patch books are very dear to my heart. Norton is a conglomeration of all the roguish ponies I rode as a child, when I was so desperate to ride that I just didn't care that most of them were intent on inflicting an injury on me.

I loved your review, although I should say that the only horsemanship methods i was having a dig at were those used by Molly herself.