- May 22, 2013
Where did all the boys go? Pinked out, that’s where. Once, in pony stories, you’d expect the occasional boy; even equal participation. Josephine Pullein-Thompson wrote many titles in which it was entirely normal for a pony club to include girls and boys. No one thought it was odd. She even wrote titles in which the main character was a boy, like polio-stricken Charles in Show Jumping Secret.

But girls came, more and more over the years, to be the only sex at which pony books were aimed. It’s a sad fact that a genre which started with girls being strong, independent and forging their own lives with their ponies, has been driven by the incessant need of marketers to define markets, into a pink cul-de-sac. The pony is now almost indivisible from princess culture, not helped by the sea of pink and sparkly stuff that’s swept over the equestrian equipment market: the insistence on workmanlike sobriety for horse and rider is long gone. Whilst personal choice is all very well, it’s worth asking whether it’s really ok for this focus on the pony as dressing up object to go unchallenged. Is it really ok to alienate half the population? To make the horse exclusively female? And what of the horse itself? How far are its animal needs obscured by its objectification?

That’s not to say, of course, that series aimed fairly and squarely at girls aren’t good: Chloe Ryder’s Pony Princess titles are, despite the badging, perfectly decent stories. But it would be a rare boy who would pick them up. Their huge-eyed pony cover stars, their tiaras and sparkles, ensure that.

Victoria Eveleigh’s latest series addresses all this fairly and squarely. Joe and the Hidden Horseshoe is about Joe. A boy. He’s not Joanna, or Josephine, he’s an actual boy. He has parents, and a sister, and as the book opens, Joe’s on the move. In a beautifully written scene, which captures exactly the wrench of moving, the closing the door for the last time on all that is familiar, Joe is cast out of the town and into the country.  His mother and his sister think it’s great. They love horses, and they’ll be able to have them. Joe doesn’t mind horses: in fact he quite likes them, but went off riding lessons under the twin assault of being the only boy, and his little sister starting riding and showing him up. 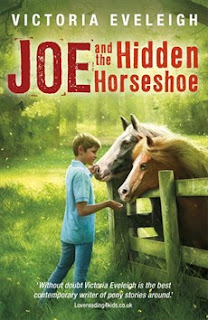 There’s a clear-eyed view of what it’s like to come and live in the countryside when you’ve been used to the town. The internet signal is non existent, getting a phone signal involves a trip out of the house, and, if his parents don’t take him, Joe's going nowhere. There’s no freedom in the countryside as far as Joe’s concerned. Then Joe’s mum goes off and buys two ponies: Lady and Lightning. Lady is nothing like her name, and Lightning came free because she’s lame. The ponies are a rapid learning experience for them all: particularly Joe’s mum. She has a fall from Lady, and is hospitalised. Emily, Joe’s sister, rapidly goes off the idea of ponies when Lightning runs away with her, and it’s left to Joe, with help from their Romany neighbour Nellie, to look after the ponies.

Joe, being devoid of the romantic love for horses of his mother, is rather better with them than she is. It’s natural to Joe to work out why horses are doing what they are, and being unencumbered with any preconceived notions, he soaiks up the information he gets from Nellie, and Chris the farrier and re-schooler of horses, like a sponge. Slowly, Joe finds himself fitting in to the rhythms of the countryside; making friends, and enjoying the horses. Life is full for Joe: he's not a pony obsessive: he does aikido with his friends, and finds that what he learns there crosses over to the horses. Joe gets a dog, and learns to understand his sister (a bit). He learns, as do we, useful stuff like how to train as a farrier, how to avoid laminitis, and why a horse going barefoot might be an idea. It’s all woven neatly into the story: Victoria Eveleigh doesn’t beat you about the head with what she knows, not beat a sanctimonious drum.

I loved this book; it’s certainly my pony book of the year so far. Victoria Eveleigh has created a brilliant horse-loving, aikido-playing boy in Joe, and a world in which it's entirely normal for girls and boys to love horses. I hope that all the boys out there who are too wary of being thought weird to admit that they like horses, read this book and realise that horses don’t have to be pink. There’s a place in the horse world for them too.

Thanks to Orion for sending me a copy of this book.
Review

Goldielover said…
I think it is a real shame that they've so obviously slanted the market towards the girls. The earlier horse and pony books on this side of the Atlantic were aimed at both boys and girls, I think more so than the English ones were. The Walter Farley books, with Steve and Alec as main characters, and the C.W. Anderson books, which had about a 50/50 split, and the Famous Horse Stories series, appealed to both. I can't imagine too many boys willingly picking up a Saddle Club or Pony Princess book, though. Its not just pony books - I think the boys are being badly served in general when it comes to books that appeal to them. I'm not surprised so many are reluctant readers these days.
22 May 2013 at 19:17

Jane Badger said…
I think the whole ranch book thing was a big help for American books, as they were obviously aimed at boys as well as girls. You're right too about Walter Farley etc - plenty of boy main characters there.
23 May 2013 at 10:33

Anonymous said…
I just found this site and love it! I completely agree with this post and with Goldielover. There did used to be a strong representation of boys (at least on this side). The Marguerite Henry books I cut my teeth on were all boys, but one. I seem to remember an old interview with her where she was asked why she didn't have more girls and I believe she said that publishers told her girls will buy "boy" books but boys won't buy "girl" books. Wish we could get a happy medium. The book you reviewed sounds lovely. I love how it sounds so practical and matter of fact about life with imperfect ponies
23 May 2013 at 17:46

madwippitt said…
And KM Peyton always had plenty of boys (and made me cry when she killed Will! I reread the pages thinking I'd misread it ...) Oh, and Monica Edwards ... it's a modern thing isn't it, this typecasting?

Jane Badger said…
Yes, the killing of Will was a very bad moment. Made the later rehabilitation of Mark all the more difficult, in my opinion!
28 May 2013 at 08:51

Barbara said…
Hi Jane, just wanted to let you know I've mentioned your amazing book and blog on my blog here http://marchhousebookscom.blogspot.co.uk/2013/06/lost-treasure-found-and-other-news.html
I can't tell you how much I'm enjoying dipping in and reading bits as and when I get time. Barbara
11 June 2013 at 09:44

Jane Lovering said…
I've just found my way here too, and can't believe it's taken me so long! In fact, (whisper this, it's embarrassing), since my sons and daughters grew up a bit, I didn't even realise that pony books were still a thing!
I remember boys being firmly a part of pony stories when I was growing up (in fact, I'd credit KM Peyton with giving me the germ of the idea to go into writing romance...)and it's a shame if current books are all aimed at the 'ponies are cute, cuddlesome things just for girls', when we all know that the huge input of effort and ambition necessary to be a successful rider is something boys are also good at!