Amy’s dearest dream is to have a pony, but then her Great Aunt Myrtle buys her one. Clown, as the title, The Most Horrible Pony, suggests, has some horrible habits. He’s a demon to catch; he bites and bucks. There’s more for Amy to contend with though. One day, out on a ride with Clown, who isn’t totally unreliable, Amy finds a Thoroughbred filly in a deserted cottage. The mysterious Dagmar appears too. Amy finds out a famous filly has gone missing, and works out that the filly in the cottage is of course the missing Eastern Eclipse. There’s a reward for her return, but the huge blowfly in the ointment is Dagmar, who wriggles and squirms her way out of informing the police herself, and endlessly manipulates Amy (and later her friends) into not doing anything about it either. Amy finds this hornswogglingly irritating, and so did I. That’s good, in that I identified with the character, but Dagmar’s intransigence is so unrelenting and pigheaded (and this is quite a long book, so there’s an awful lot of Dagmar and her bolshiness) that in the end I lost all sympathy with her and no longer cared about the reasons why she wouldn’t do the right thing. 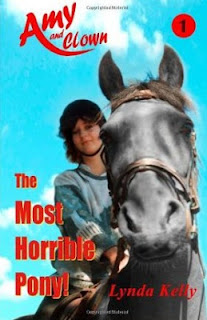 The book does take a long time to get where it’s going. The plot is pretty conventional; girl, pony, gymkhana and missing racehorse, and there were periods when I wondered when it was going to get moving again. Fortunately the author does a pretty good job, on the whole, with her characters. Amy is an energetic creation, and there’s a lot to like in her. Lynda Kelly has written a brilliant younger brother in Liam, one of the best I’ve read in a long while. Liam has a procession of imaginary creatures, which provide a comic highlight in the book, and the relationship between him and Amy is realistically snippy. The children are the most successful characters: Mum is something of a shadow; Dad rather less so, and Great Aunt Myrtle rather too exaggerated for comic effect.

That said, the author does a good job with Clown. She writes a good horse; or at least a pony: the mysterious filly never really emerges from the shadows. Clown, however, does. The writer also does a gripping gymkhana. Clown turns out to have a talent for gymkhana games, and the gymkhana is one of the highlights of the book. Gymkhanas aren’t necessarily easy to write: they can easily turn into yawn-a-minute litanies of who won what. Lynda Kelly creates real interest in hers, and it’s interesting seeing Amy realise in a thoroughly realistic and unmoralistic manner, that winning isn’t everything.

There are a couple of horsy bits I struggled with a little: Clown gives Amy some hefty bites while she’s grooming him. I can see that she might not have known to do it herself, but it might have been an idea for some other character to suggest tying him up as a solution. Then after Amy’s spent hours trying to catch Clown she dumps him into his stable, fully tacked up, and leaves him there.  That might well be a failure of editing: with the way Amy’s portrayed in the book, I’m sure she would relent and go and sort him out, but she didn’t, and that did make me start to get judgemental and twirl my pearls.

If you’re after a straightforward pony adventure with some decent characters, don’t be put off by the clunky titles, as these books should fit the bill. There’s four more in the series (one’s planned for later this year).