- November 08, 2011
Emily Edwards - The Trouble with Being a Horse
Single Stride Publishing
Around £4.00 on Amazon
Emily Edwards' website

I tend to shy away from reviewing self-published books, after a particularly bad experience with one, and so when the author of this one got in touch with me my first reaction was to think thanks, but no. However, the author sent me a link to her first chapter, and I read it and was intrigued. Yes, I said. Please do send me a copy.  So, a week or so later the book, arrived, fresh from Canada. 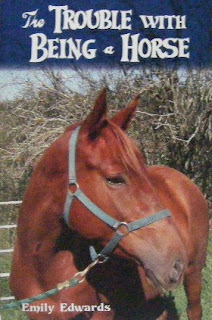 The common theme with all the books I'm reviewing today is that the authors have managed to find a new angle on the pony story. The Trouble with Being a Horse is Emily Edwards' first novel, and it is the story of Olivia,  forbidden to ride. After a fall from her favourite horse at the local riding stables, she loses consciousness, and when she wakes up, finds that she has turned into a horse: a chestnut mare. When a child (and occasionally, I admit it, even now) I often used to pretend to be a horse, and would half pass my way across the playground, or do a fine extended trot along the street. (For those who are worried about the spectacle of someone nearly 50 doing this, I now restrict myself to an extended walk). Most children with a pony obsession pretend to be a horse, but it really happens to Olivia.

Emily Edwards does a good job of exploring what it would be like if this really, and truly happened to you.  Olivia still has fully human reactions still, and so we see her battling with attempting to fit in with her new equine world. She is a horse, but doesn't know how to be one; but as a human she was struggling to fit in with her family. She doesn't really fit in anywhere, and it is Olivia's growing awareness of this, and attempts to deal with it, that lend the book a real spark. Some of the language is occasionally a little awkward, but overall, this is an intriguing first novel.


The Horse Girl  is set in 18th century Lincolnshire, and is the story of wheelwright's son, Thomas, the girl Ling, and Stubbs. Stubbs is one of the main reasons this book leapfrogged others to the top of the to be reviewed pile.  I have been a Stubbs fan since the day I found a very used copy of his Mares and Foals as a stamp. Thomas is a failure at the local grammar school: he is, as we now know with 21st century hindsight, dyslexic. Thomas meets Ling, desperate to find a horse she knows Stubbs has bought, and which she thinks he will butcher in order to study its anatomy. They discover that Stubbs is not the brute they had imagined, and Stubbs looks set to become part of Thomas' future, employing him as an apprentice. Ling, however, is set on finding her horse, Belladonna.
I found this a deeply frustrating book.  The first half, I lapped up. It is when the book is dealing with Stubbs, and with Thomas and his family, that it is at its most impressive.  The description of how Stubbs goes about his work is enthralling, together with the gradual flowering of Thomas' abilities as he begins to discover how he can use his talents. 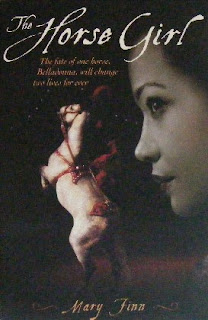 It was when the book took off in a pell mell charge after Ling and her desire to find the horse Belladonna, after finding that she has been sold on, that the book lost me.  Ling is the almost obligatory feisty teenage girl, determined to cast off the shackles that confine the 18th century woman, and go her own way. Ling I simply didn’t find as fascinating as Thomas. I enjoyed the small things the book focussed on in the first half; Thomas’ sister Nan; the family’s meals, and the details of how a wheelwright worked.

Mary Finn has written two books: an excellent exploration of Stubbs, and the problems of being dyslexic in a time when your condition was condemned as stupidity, and a love and adventure story which lacks the sure touch of the first half. If Mary Finn had concentrated throughout the book on Stubbs and Tom, I would I am quite sure have been recommending this book as one of my reads of the year. She has the atmosphere off incredibly well; Tom is is an absolutely believable character. The detail about Stubbs is fascinating, and that is what I wanted more of. [The sensitive should beware: Finn goes into reasonably graphic detail about Stubbs' methods of discovering the horse's anatomy, which involved peeling a horse's dead body back layer by layer].

Ling I found almost an irrelevance: I could quite see that she would seek desperately for her horse, but her career as an instructor to the wealthy I found harder to credit, and it is difficult to feel much sympathy for a character when you are heartily wishing the hero would dump her and get back to Stubbs and something genuinely fascinating. Teenage love stories are ten a penny, but an exploration of an artist's methods and psyche are not.   So, please buy this book, and read the first half, because it is very, very good. I do not normally go off the deep end, and rave, but about the first half of this book, I do. It is fantastic. Approach the second half, however, with caution.

Taking Flight is set in Belfast; rare for a pony book, and has a male and a female heroine, also rare.  Vicky is the daughter of divorced parents, and she is a tad entitled. Her parents to a certain extent tiptoe around her and her wants, though she is lucky in that the divorce seems amicable, and that she gets on with her stepmother.  Vicky has a cousin, Declan, for whom life is radically different. His father is dead, and his mother is an alcoholic. Declan's school career is disastrous. Vicky and Declan's paths finally cross when his mother is hospitalised after a particularly grim alcoholic episode, and Declan goes to stay with Vicky. Vicky is a keen rider, and is determined to win on her expensive show jumper, Flight. Declan, at first, wants nothing to do with Vicky or her horse, but finds himself falling under the spell of the horse.

It is very unusual that in pony book world a boy falls under the spell of a horse. Sheena Wilkinson does a fine job of showing Declan's ambivalence about this skill he suddenly finds he possesses.  From a boy with no future other than a rapid descent into crime, Declan is presented with a way forward, but it is not one he is necessarily eager to take. It would be too simplistic a fairy tale were Declan to progress effortlessly to horsy success, and he does not. Vicky is furiously jealous of Declan's abilities, and resentful of his arrival into her life, and takes action on her dislike. Sheena Wilkinson succeeds in making Vicky's very brattish behaviour believable, but still keeps you on her side.  Indeed the strength of this very good book is that you are on both characters' sides: however horrible their behaviour is.

Declan's school is very well done too: both the teachers who have written Declan off, and those who keep on and on trying with him, convinced that he can be set on a better path. The other adults convince. This is a real world. 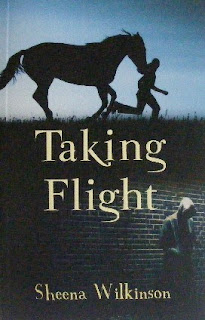 My only very minor quibble with this book was wondering if the ending was just a little too pat: the characters have been redeemed, and their efforts rewarded. I wonder if Vicky's boyfriend would have been quite so ready to take her back ; I think she was lucky there. But this is a minor quibble. Taking Flight is a fine read, and one which will be swallowed in a sitting by any teenager who is even remotely interested in the horse.
Review