Gardening on the edge: lamb's lettuce

- November 10, 2011
It is with a huge phew that I write this post, waving to the other gardeners on the edge out there. I had visions when I wrote the post of some dismissive comments about my efforts - though actually, I suppose if you were any good, you would move swiftly on and ignore, and that suits me fine.

I've been thinking a lot about my gardening efforts since my first post, and I do have a few principles. Earlier today I went and photographed my vegetable patch so I could show you what I do, and my first thought was that I should trim the flowers off my rocket plants, but then I thought, heck, if it weren't for the photos I just wouldn't, so I left them. Who am I trying to kid? This is my patch: 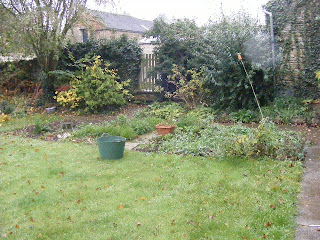 There is an awful lot of green, but that is because a lot of it is weed. It's not that large (I have to confess that I have a couple of other patches but they are even worse and I am going to have to work up to showing the full horror on screen).


At first, I thought I'd mention the general principles on which I garden, because there actually are some. I have of course tried to succeed without them, and no doubt still will. Quite often with me hope triumphs over experience, as you will probably see a. if you follow what I'm up to, and b. I keep on telling you about it.

Something on which I batten quite a bit of hope is the generosity of other gardeners.

Principle 1. Acquire some local friends who really can garden. I am lucky in that I have several of these. They have beautiful gardens, and years of experience (so do I have years, but my years have not been useful years as theirs have). They know what I am up against in terms of climate and soil conditions as theirs are thereabouts the same. They do not mind when I moan about my gardening disasters, and they give me the benefit of their years of experience. One of the most useful things I learned was from a brilliant gardener (I mean really brilliant - he propagated auriculas). Shortly after we moved in I was complaining that not one of my lambs' lettuce seedlings had germinated. This, he said, was because I planted it in May. But that's what it said on the packet, I said. Makes no difference, he said. Lamb's lettuce is a short daylight crop, and it germinates only when the days get shorter. He was absolutely right. I sowed lamb's lettuce in August; it came up in August, and it has been with me ever since.  I let it self seed and it comes up on its own every year. It comes up in some odd places, and I have been known to pick our winter salad out of the gravel path in the front of the house, but it's salad, and it's there.

Here's a horribly congested collection of seedlings (as well as a few other things I can't identify) and which I really should thin out, but haven't. 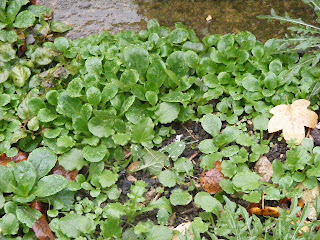 None of my gardening friends, and my sister, who have kindly provided me with numerous raspberry plants, have been able to  help with my efforts there, alas. More on those soon.
gardening on the edge