Trixie and the Dream Pony of Doom

Trixie and the Dream Pony of Doom by Ros Asquith
Harper Collins, £4.99

It's such a marvellous title, isn't it? The Dream Pony of Doooooooom. I could not resist the title, and so, along with a load of other things it made its way across the Atlantic to me via Book Closeouts (though that said, it is actually a British book). I had a lot of fun before the book arrived conjuring up scenarios for The Dream Pony of Doom. Was it a Connemara fresh from Ireland, with a liking for the mystical? Or a sadly clumsy Shetland? Or maybe a literate pony convinced it was the next Cassandra? 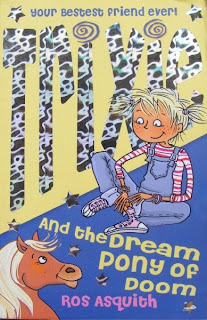 Well no, and no, and no.
It really isn't a pony book in the classic sense: this title is part of a series about Trixie, who is badged as "your bestest friend ever", and her adventures. The book could just as easily be the Dream Kitten of Doom: the pony's a vehicle for the story. Trixie is desperate to have a pony, and hopes her grandma will win a television quiz and buy her that pony. It doesn't quite work out like that, and Trixie ends up buying a very cheap pony someone wants to shift fast. Who this pony actually is is telegraphed very obviously some pages before, so I spent the rest of the book thinking "For goodness sake, how dumb do you have to be? Haven't you realised yet who the pony is?" Very dumb, is the answer, as half an ounce of thought would have brought the book to a rapid halt a third of the way through.

There's a strand of children's literature - possibly just aimed at girls, which is written in breathless first person form, with LOADS of exclamation marks, lots of FRANTIC emphasis, quite possibly several different fonts and the assumption that life is just one great big exclamation mark. This book is one of them. I don't dislike this form hugely, though I do find the relentless pace a bit wearing. It's like the difference between Blue Peter of yore, and of the 1990s, where pieces instead of being delivered in a straightforward way had to be put over in a punchy style as if the producers were petrified of losing children's attention and felt the only way to retain it was to Emphasise How Much Fun Everyone Was Having.

This book is the same: Fun! Whackiness! Drama! On every page! Or as Trixie would say, "Very extremely fun!" It's as if the author thinks if she lets up the pace for a minute POOF! - her readers will cast the book down and go and play with something else much more exciting.

That said, Ros Asquith doesn't do a bad job with her choice of style. The book is written with great energy, and that does sweep you along. As a giddy whirl through a girl's brief flirtation with pony mania, it just about works. There is a lot of fun: I like Trixie's descriptions of herself: she's honest and funny:

But being amusing isn't enough. There's a distinct lack of invention when it comes to the character's names. The teachers are called Mrs Hedake and Mr Wartover, and Trixie's friends are Dinah Dare-deVille and Chloe Caution.

The emphasis on whackiness means that there's a bit of a disconnect between the plot and reality: when it comes to a choice between reality and the world of giddy japery, the japery wins out, and that doesn't help the book. In the desire to have everything as appealing and fun as possible, what actually happens in the horsey world is either ignored or just got wrong. The last scene has Fungus, the pony, taking the absolutely, completely and totally not in control Trixie (who is dressed in her pyjamas) over a show jumping course in a show. At the last fence:


"Fungus accelerated towards the fence... and pulled up short, blowing hard.....
Fungus looked round at me, a bit ashamed. I felt in my pyjama pocket and found a sugar lump.
"Go for it," I whispered as he snaffled the sugar.
Fungus turned, trotted back a few steps, turned again and raced towards the fence as fast as he had when we were trying to escape the cops."

That sounds to me like a circle, and that surely is a refusal. However, this counts as a clear round in Trixie land.

A bit more accuracy (and perhaps research) wouldn't have done the book any harm and might have made for a more interesting plot. Can you imagine the horror if Trixie turned up in her pyjamas to a real Pony Club event? The fanned brows? The pale and horrified faces? The hissing, muttering and fuming? A bit more research would have turned up what a staggering faux pas this was, and given the author some decent plot lines to work with. As it is, the whole issue is skated over.

This book is a fun read, but definitely not a great one. Ironically, in trying to make the book as entertaining as possible, the author has produced a book that's rather disposable. It's the equivalent of a pink sparkly browband. You don't need it, but it's quite fun to have.
Review

Jane Badger said…
Oh yes. And much, much more besides. Take a look here: http://www.bijouponywear.co.uk/products/view_subcats.asp?CID=25&name=New%20Range%20-%20Pony

jazz up those plaits:
http://home.rochester.rr.com/hanpoc/Pocius/PonyBling/OurProducts.htm

Juliet said…
You sum up this kind of breathless, exclamation mark-ridden children's fiction brilliantly well. And the analogy with Blue Peter is spot on. I've come to think of these books as a kind of half-way house between comics and 'real' stories. My kids have in turn picked them up eagerly (often having been given to them as presents) but quickly bored and moved on to books with weightier plots and characterisation. They do indeed seem to be all ephemeral sparkle and very little substance or invention.

Jane Badger said…
Thanks Juliet! Like yours, my children read these books happily but then that's it. On the subject of equine bling, you can also get show pony make up (well, colour enhancer!)
21 July 2008 at 10:36

Anonymous said…
Hello, Jane. I wandered on to your site because someone said you were reading my book (hope hospital went OK, by the way, and your nose ison the mend). And then, browsing, I found this (very entertaining) review of a book my 9-year-old has just finished.

She is readily attracted by ponies, bling, and pony bling. She would happily wear a pink sparkly browband herself. Anything with cartoon ponies and lots of shouty capital letters and exclamation marks will have her reaching a book down from the library shelf with glee. But actually, although there were some bits that made her giggle (mainly the antics of Trixie's brother Tomato), it took her ages to get through it.

My issue with the book wasn't the lack of realism in the horse sense department - it was the self-indulgently meandering nature of the whole thing. My daughter was desperate to know about the pony, but was endlessly distracted by all the side alleys about the TV show and which Nasty Girl had forged the picture of the teachers kissing. A book like this - capitals, cartoons - is no doubt aimed at the less-than-committed young reader (amongst whom, sadly, my daughter numbers). For this target audience you need a good, fairly linear, pull-along plot. Set piece gags are fine, up to a point. But you need a much tighter narrative structure if you're going to hold their interest, I reckon.
28 July 2008 at 09:40