- June 03, 2008
Following on from the previous post, I can't think of a suitable quote for slipping and sliding along the mud on our morning walk today. It has been raining all night, and the mud is at that treacherous state where the earth has stopped taking in water, and it's lying on the surface. The dog doesn't mind this: her claws seem to provide enough purchase, and she zips along as normal while I mutter, moan and skid behind her. We have two sorts of mud here: deep, claggy stuff which welds itself to your boots (no need for weight training in our bit of Northamptonshire) or this awful skiddy stuff, which I loathe. I hate the sudden whooshes along as I hit a particularly treacherous bit, but most of all I loathe the added horror of all the dog muck we acquire whenever it rains from the fair-weather dog walkers who send their dogs along the paths while they remain, reasonably dry-shod, on the road, leaving the wellied and waterproofed stalwarts to negotiate what they can't be bothered to clear up.

The wheat has suddenly grown, and all I can see of the dog when she makes the occasional illicit foray into the crops is a blonde head popping up every now and then, checking I am still where she thinks I should be. We both end up sopping wet from the walk, and as I am a noble owner, schooled in the belief that I Must Look After My Animals Before Myself, I dry dog with one of her epic collection of towels before I rescue my socks from my wellies and wish, yet again, that I had remembered to re-waterproof my coat. Dog does not think I did a good enough job, as I find her half an hour later having made herself a lovely little nest on our pillows. She always goes and dries off on our bed (strictly forbidden) rather than her own. Am miffed as I thought I had done a good job but I have obviously failed Labrador Quality Control.

But back to work now, and the epic to-do list. It's a drear and gloomy day here, and the view from the office window is shrouded with rain, though it's still beautiful. I shall miss it when we go. 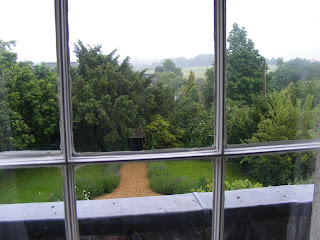 winnie said…
I've got a quote for you Jane:

"One may not doubt that, somehow, good
Shall come of water and of mud;
And, sure, the reverent eye must see
A purpose in liquidity."
It's Rupert Brooke...

I had some terrible mud problems during the last winter, including a certain amount of slipping about and the discovery of several deep mud holes in the fields. I nearly lost my wellies several times, and my socks were in a permanent state of migration around my toes. I have had two pairs of laeaky wellies also, and finally gave in & splurged on a pair of Tyne Muck Boots. What a marvellous invention they are! Super comfy, very grippy round the ankle & calf so they DON'T come off in thick mud and my socks stay on my feet when I'm wearing them.

So I suppose the purpose in liquidity for me was that I finally got a pair of waterproof boots that are comfy to wear - I spend most of the winter sloshing around in them and my feet are very grateful!
4 June 2008 at 11:23

Jane Badger said…
Ooh Winnie, thank you! I love that last couplet: "And, sure, the reverent eye must see / A purpose in liquidity." I am now repeating it to myself, and hope it will Go In. It sounds like something Hilaire Belloc would have picked up and run with.