- June 10, 2008
I've been tagged by Nigel, of Bagot Books, over at the Ibooknet blog (of which more later). I gather this is a meme. Someone did once kindly explain to me what exactly a meme was. My Oxford Handy Dictionary is silent on this point, and I can't remember what I was told, so will have a hunt round the Internet later and come back and explain.
Anyway: here is the stuff:
1. Who’s your all-time favourite author, and why?
Oh goodness. I always think if ever I am lined up against a wall and threatened with death unless I can come up with a favourite author, I will be splotted bloodily against the wall because I can never answer this.
Arrghhh. Erghhhh. Who? So often it depends on what frame of mind I'm in: if I have the flu and

am incapable, it's Dick Francis. If life is Too Much and I need amusing, it's P G Wodehouse. I guess for the sheer amount of times I've read them, it would be a toss up between Jane Austen and C S Lewis. I first read C S Lewis' The Lion, The Witch and the Wardrobe at the age of 7, and still remember the joy of discovering there were still a whole 6 other books in the series to read. The Voyage of the Dawn Treader is I think, an extraordinarily hopeful book, with its redemption of Eustace. It is the one book I can read when all else fails me, even the Psalms, which are my final refuge when life is appalling.
Jane Austen I found a bit later: I can't remember exactly when, but I suspect late teens, and my first read was my mother's copy of Pride and Predjudice. I still re-read it pretty often, but my allegiance has now shifted to Persuasion. (In passing, one of the recent TV adaptations made me spit with rage with its inaccuracies. Anne would never, never, have run pell-mell through the streets of Bath). Persuasion I love because I love Anne.
There. Still haven't come up with one. The wall beckons.
2. Who was your first favourite author, and why? Do you still consider him or her among your favourites?
Enid Blyton, without a shadow of a doubt. I first read a Famous Five, read the series, read the Secret Seven, The Land of Far Beyond, St Clare's, Mallory Towers... the only one I disliked was Noddy. I adored the Nature Lover's Book, soon to be re-published by Evans. Every year I would look out for the things she mentioned (it took me years to find some of them.) I remember hearing my mother, an Infant teacher, answering someone who took her to task for allowing me to read Enid Blyton. This was in the 1960s, when librarians and educators started to proscribe. "I let her get on with it," my mother said. "She'll get them out of her system, and that will be that." 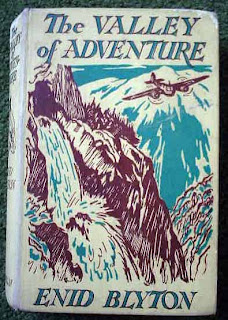 How right she was. Can I re-read Enid Blyton? No, not at all. There are a lot of children's authors I re-read, but EB I can't. She is a wonderful story teller, but now I read her with an adult, jaundiced and critical eye and I cannot get beyond the first few pages.

3. Who’s the most recent addition to your list of favourite authors, and why?
That would be Alyssa Brugman, who is an Australian children's author. She writes pony books,

amongst others, and takes what can be a very formulaic genre and subverts it. I've just read her Hot Potato, which tackles the girl finds rebel horse and reforms it theme. Other stuff I've read recently and loved are Jessie Haas' picture books - she achieves so much with such economy, and Ian Sansom's The Case of the Missing Books. His dialogue is amazing, and his characters wonderful, and through it all, his hero Israel wanders, completely phased by the strong and eccentric community he has ended up in.
I'm also reading a selection of John Betjeman, and was very struck by the awfulness of his experience in Original Sin on the Sussex Coast.
4. If someone asked you who your favourite authors were right now, which authors would first pop out of your mouth? Are there any you’d add on a moment of further reflection?
Jane Austen, C S Lewis, William Corbin, Alyssa Brugman, Jessie Haas, Josephine Pullein-Thompson, Anthony Trollope - do poets count? If so, T S Eliot, Coleridge, Keats, Andrew Marvell - Marjorie Allingham, P G Wodehouse, Katie Fforde, Dorothy Sayers, Gladys Mitchell, Ian Rankin, Nancy Mitford. On reflection: Ruby Ferguson, Veronica Westlake, Monica Edwards, Caroline Akrill, Barbara Willard, K M Peyton, Evelyn Smith, Bill Bryson.
I'm supposed to tag someone now: but I'll only do it if you want to be tagged. Let me know if you do.