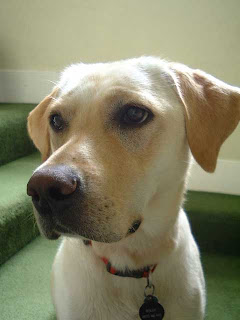 Our village fete happened yesterday, together with a fun dog show run by Wellingborough Dog Welfare, and you see to the left of you Holly, owner of the fourth most appealing eyes, and a magnificent second in the Fastest Chocolate Drop Eater competition. We really weren't sure whether we'd be able to enter anything - Holly is a rescue dog, and when we first got her was so nervous we couldn't get her beyond the front gate. The first time I took her to the school gates she had complete hysterics, and she does still tend to panic when faced with things that worry her. So, we thought the fete, with the Pipe band, Majorettes, Morris Dancers and teeming people and dogs might be a bit much, but she was an absolute star.

It did take her a little while to come round to the Pipe Band, but after we stuffed her face with food she agreed with us that Pipe Bands (the Bedford Pipe Band - excellent. I love bagpipes when they are played well, and these were) were OK.

Dog used to be appalling on the lead, and so we were a bit worried that she would Forget It All and tank around the ring, but in the first class she went in with her mate Truffle, a Flatcoat Retriever and they were too interested in talking to each other to tank. Truffle won the class (Prettiest Bitch) so we were proud of her too.

Daughter was doing a solo with the school choir, which I could dimly hear from our side of the field. I was praying that Holly and I would get out of our last class in time to see as well as hear, but of course as we tore out, the last notes sounded..... The last time I missed one of daughter's solos stuck in her mind, and it has become one of those things that is flourished up whenever she is more than usually hacked off with me... "YOU didn't hear me sing my solo at Rushden...." but fortunately she saw the greater glory of the dog as being far more important, and the fact we turned up bearing rosettes made her day. Thank goodness for that. I'm told daughter did well, though wasn't helped by the fact the never reliable village sound system died the moment she took the mike. So more pride. For daughter I mean, not the village sound system.
dog

Vanessa said…
Well done Holly! A triumph! And no doubt M's singing was similarly fab! Got to go now as stress making me use far too many exclamation marks!
26 June 2007 at 10:38