Before I get on to the book I am supposed to be reviewing, I wanted to tell you about another Terence Blacker title, The Twyning. I took this on holiday last year. It’s (nominally) a children’s book — a fantasy about rat society in Victorian times. My son (who is 24, and 6’ 5”, before you start imagining some pathetic, waif-like 10-year-old) and I fought over this book. If it hadn’t been for the fact that it was a library book, and my library book, I would not have won, but I did. It is a fantastic read. If you are not keen on rats, do not let that put you off.

And if you are concerned about the progress of the mother-son relationship, I bought him a copy of his very own.

I am having a bit of a down on covers at the moment, so I will say that I would not have picked Racing Manhattan up had it not been for the fact that it was by Terence Blacker, as the cover, although accurate, has that sort of misty soupiness that Bertie Wooster so much distrusted in Madeleine Bassett. At any moment you feel it is about to start asking the stars to be its friends.

But the book…. Oh, the book. It is a great read. At one point I had to put it down as the emotional tension had been ratcheted up so high, I couldn’t go on.

This is a plot that’s been done before (girl from difficult background breaks into the bottom rungs of life in a racing stable, shows talent, it all goes horribly wrong etc) but it’s rarely been done so well. It’s ringingly authentic. The author was an amateur jockey until he ran off to work in a French bookshop, and his brother was a successful professional jockey, so he certainly knows his racing. This gives the book a sound factual background in which the heroine, Jay, sits. 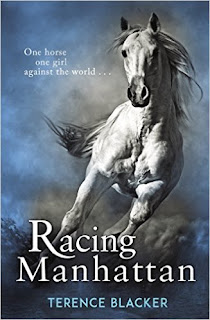 Jay is an orphan. She has never known her father, and her mother died when she was nine. Then she went to live with her Uncle Bill and his family. Uncle Bill makes a lot of money, and he’s not particular how he makes it. He takes Jay and her cousin Michaela to illegal pony races to race. Jay is good; very, very good.

But life is not easy in a household where you are made to feel like the cuckoo in the nest, and after a nightmare act of betrayal by Michaela, the one person she thinks is her friend, Jay bolts to Newmarket. She manages to get herself a trial position in a run-down yard, where even her ability to look after herself and her horses is not enough to protect her from the rampant sexism that stalks the yard (and we suspect, the rest of Newmarket as well). What makes life just about bearable for Jay is a horse, Manhattan. A descendant of The Tetrarch, she has inherited his tricksiness, and has been labelled the yard monster, only to be tackled from the right side of a pitchfork.

Everything’s labelled in this Newmarket – you can’t change a mare. They’re female. Once they’ve decided not to cooperate, they’re useless. Same, really, as female lads like Jay who don’t cooperate or behave the way they should. Or Saudi princes who insist on using a female jockey because that’s not when you do when you represent centuries of unquestioned male superiority. Girls – women — femaleness. All suspect. All need to be controlled, and strapped down.

This book’s about what happens when people refuse to listen to that; when trickles of change in a community, not just one character, come together to produce something phenomenal. One of my favourite scenes in the book is where the trainer’s wife, Mrs Wilkinson, talks about what it’s been like for her being a woman in a world that men are determined to keep for themselves and we see that she and Jay have tackled the same thing, but in very different ways.

The horse, that difficult mare, is a fantastic being too. Manhattan is right up there with the Darklings and the Jagos as an equine creation.

Racing Manhattan is a brilliant read. Once Terence Blacker's picked his reader up, he does not easily put them down again.

My only quibble with the book’s contents is this. This may annoy you, or it may not.

If I were a horse, you wouldn’t need the equine dentist out to me, let’s just say that.

But this is my favourite horsy read of the year so far. It’s one of those books that I want to read again, straightaway, so that I can enjoy the brilliant bits all over again.

Sarah said…
Was it "Saving Midnight" or "A Horse called Hero"??

Jane Badger said…
Definitely not A Horse Called Hero because I've read that (not keen). I'll give Saving Midnight a go though - thanks very much for the suggestion.
10 June 2016 at 08:15

SarahB said…
I wish I had thought to write down the books I liked the look of. I thought I would remember them but sadly not!
10 June 2016 at 18:37