- June 10, 2016
Huge, huge thanks to Victoria Eveleigh whose memory banks are in an infinitely better state than my own, because she remembered well, everything, and much of what you read here came from her.

In the final event of the day, Meg Rosoff interviewed K M Peyton. They have known each other for some years. Meg was talking to David Fickling about how much she enjoyed KM Peyton's books, and said wasn't it a pity that she was dead. 'She's not dead,' was the reply. 'Would you like to meet her?'

They met, and have stayed in touch ever since.

Kathy had written several books before her English teacher suggested to her parents that they send one off to a publisher. That was Sabre, Horse of the Sea, published in 1948. Despite having written about horses since early childhood (Sabre was by no means the first book she wrote) Kathy hadn't ridden much. This did not stop her having a stable-full of imaginary horses and ponies she documented in notebooks, and reading every instructional book she could find. 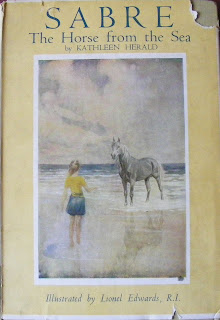 With the proceeds from Sabre, riding lessons were an option. Kathy didn't have a horse of her own until some time later, though there were ponies for her daughters. One of them was the model for Fly, the unbroken piece of trouble Ruth buys in Fly-by-Night. The pony nearly broke them, but went on to do very well. Kathy bought her own horse many years later from a sale as a failed show jumper, and she turned out to be an amazing hunter. Kathy ended up injured because the horse stumbled through no fault of its own. Cue more murmurs of agreement from the audience - because we all know it is never the horse's fault.

After her horse died, she didn't replace her, but she did tell us that if someone were prepared to deliver a ready-tacked up horse to the door, like the Queen, she'd certainly consider riding again.

After Kathy married, she and her husband wrote books together, generally on sailing. The Flambards series were her earliest stories to feature ponies, and they made an immediate impact. The first three books of the series were nominated for the Carnegie award, with Edge of the Cloud winning it in 1969. The series had a hugely popular television adaptation. As was often the way with actors, said Kathy, most of the actors said they could ride when they couldn't just to get the part. She was impressed with how very quickly they learned to ride. Christine McKenna, who played Christina had to learn to ride side-saddle. It was the only way she could ride and so she would bring her side-saddle with her if she was ever invited to ride. 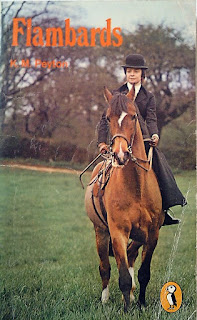 The Team (sequel to Fly-by-Night) was also nominated for the Carnegie award. Meg said how daring it was of KMP to mention Ruth having a period in this book — Ruth has the sort of nightmare period that fells you completely, and she can't compete, but stays in the horsebox, curled up in agony. Kathy said in the same matter-of-fact way she dealt with it in the book that she was sure most of the women in the room could remember an occasion when their period had ruined something important — it was just a fact of life.

It wasn't just periods which made an impact on readers: the whole series did, particularly the main male characters in the books, Jonathan and Peter. Kathy said that in her experience, people either liked Jonathan or Peter, at which point Victoria Eveleigh turned to me and said 'Jonathan', and I said 'Peter'. So that's alright then. You can form orderly queues behind us. 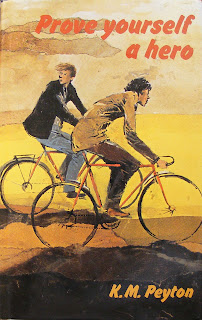 Probably the uber-Peyton hero is Patrick Pennington, who is definitely dangerous to know. He is a hugely talented pianist, and it is to him that Ruth's passion for the horse transfers itself. She was not alone. Victoria said:


'I told her [KMP] I was still hopelessly in love with Patrick Pennington, and with lovely twinkly eyes she said, "I am too!"'

Patrick Pennington had no parallel in real life, but Kathy used some real life incidents and characters in her books. There were horsy mothers who'd been every bit as focussed as Jonathan Meredith's mother on the horses and the competition, rather than their child. She mentioned a Pony Club mother she knew whose child had fallen off and been sent to hospital, but who carried on jump judging after seeing the child off on the ambulance. Another real life character whose foibles were recycled was a man who'd reached the point many of us recognise when a dinner party has gone on too long. He fired off a shotgun to get his guests to go home, an incident Kathy used in Late To Smile.

Kathy was asked if she had a favourite amongst her books. Several of her stories feature racing, and one, Dear Fred, is one of her favourites. It tells the tragic story of Fred Archer, a jockey in the Victorian era who became champion jockey 13 times, and who shot himself at the age of 29 after the death of his wife. Should anyone be interested, she has a film script for it at home. 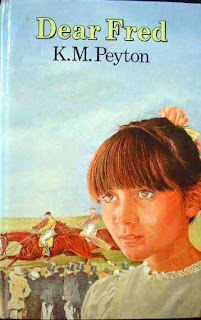 KMP has not stopped writing. Wild Lily has just been published, and she is working on her next, which will be a book for adults. 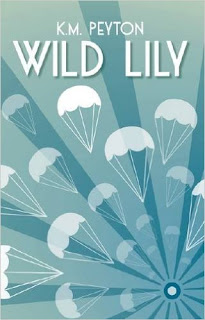 After the talk finished, there was time for questions, and to have books signed (everywhere people were clutching KMP titles they'd had for years). Victoria was one of those who got to chat to Kathy afterwards. If you haven't read Marion's Angels, look away now, because there is a massive spoiler coming. Victoria said:

'She told me that she wrote two endings to Marion's Angels. In the first she killed off Pat Pennington (he drowned) so Ruth could live happily ever after with Geoff and Marion, but then she couldn't bear to kill Pat so she wrote a different ending (thank goodness — I'd have been traumatised forever!).’


I think we all finished the day feeling immensely privileged to have heard two such excellent authors in conversation.

If you missed my earlier pieces on Horse Tales (which was held at Homerton College, which might be a piece of information I’ve not mentioned until now), the other pieces are: