I was looking through the children’s books in our local Waterstone’s recently, and found a series of truly epic awfulness: the publishers of Holly Webb’s Animal Stories series have moved on from merely brandishing huge-eyed cuteness at the infant reader to straightforward manipulation of their emotions: how about these for titles? Harry the Homeless Puppy, Alfie All Alone, Lost in the Snow, The Kitten Nobody Wanted, Alone in the Night..... The series, according to the publishers, Scholastic, “realistically describes the range of emotions animals and their people feel when they are separated.” Which is fair enough, but do you really need 24 different variations on misery, albeit misery which is overcome, to make the point? When you see the books gathered together on the shelf, it’s even worse: a solid concatenation of animal melancholy.

Anyway, I’ve wanted to get that one out for a while, and now I have, onward to the Pony Princess series. I have problems with many pony books aimed at the young reader. Stories are often formulaic dips into sparkly pink cuteness, with a dash of pompous fantasy mixed in. The Pony Princess series does rather lead one to think it’s going to trot off down that path. The cover of the first title, A Magical Friend, is pink, has sparkles, and a tiara. On a pony. 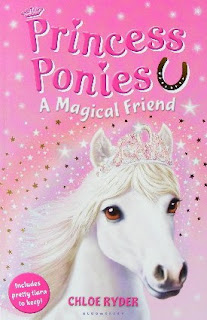 But stick with me, because matters improve after heroine Pippa’s whisked off by a pair of only mildly pompous giant seahorses to the island of Chevalia. There Pippa meets a talking pony who happens to be a princess - Stardust. There’s an entire islandful of talking ponies. The island itself only exists because the world’s love of horses is funnelled into eight golden horseshoes, which have been stolen. If those horseshoes aren’t hanging back up on the wall of the palace by midsummer, then Chevalia will cease to exist.

The missing thing which must be found else disaster beckons is a pretty conventional literary trope, but it does give a satisfying structure to this series, and the author has turned in a couple of decent, well-plotted, and differentiated, adventures. She hasn't simply re-written the first story. A Magical Friend develops the relationship between Pippa and Stardust, and introduces Chevalia, with its school, Mane Street and its cast of talking ponies. The second book, A Dream Come True, introduces the Royal Games, in which ponies compete in dressage, racing and other horsy sports, all of course without the aid of a rider. It bangs the moral drum in a way the first doesn’t: Stardust’s erstwhile best friend is hurt by Stardust’s announcement that Pippa is her new best friend, and Stardust has to both realise the error of her ways and make amends. 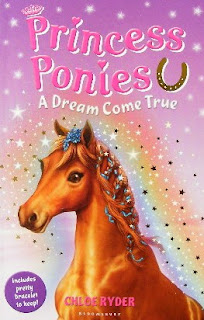 Both books have the same sparky pony characters, charmed because they have the pet they’ve always longed for: a girl. The ponies are of course little humans in pony form, but they’re fun. The creation of a topsy turvy world in which ponies rule, but have the same life experiences as humans, is neatly done. There is just one thing that bothers me about the ponies are jolly nearly humans scenario. It is a thing that bothered me with the uber-talking pony book, Silver Snaffles, and it bothers me here. How, with their total lack of opposable thumbs, do these ponies tack themselves up, let alone dress themselves in tiaras, and paint their hooves? I know, I know, I should suspend my disbelief.

That aside, I was agreeably surprised by this series. It takes what have become the stand bys of pony literature for the very young, a pony mad girl and fantastic ponies, but doesn’t fall into the trap of taking any of it too seriously. Author Chloe Ryder (pseudonym of Julie Sykes) has done a good job here.

The author, who has horses herself, I hope was not responsible for the pony care tips. It's become common for pony stories to include some horse care advice, which is good, providing it's accurate. Pippa Funnell's stories are particularly good here, with sensible and accurate information. Unfortunately Princess Ponies has gone off down a rather strange alley. The care tip in the first  book recommends ponies have regular visits from the vet, rather than the farrier, to take care of their feet. 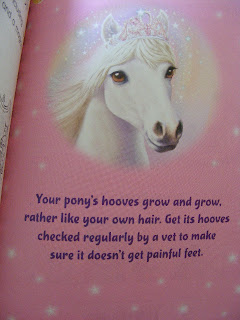 Any vet called out as a response to this would pretty soon put the owner right, and the advice isn't actively dangerous (gallopingly over cautious perhaps) but if the publishers want to include pony care tips, getting them right is essential. The care tip in the second book suggests you plait your pony's mane with flowers, which is harmless, providing you don't pick a selection of lethal vegetation, and make sure the pony's tied up so that they don't mug you for your decorations. Trying this over the fence on someone else's pony may well end up in tears.

I suspect that these "tips" are down to the publishers, rather than the author, but it's a shame when inaccuracy lets down an otherwise decent series.

My book, Heroines on Horseback, is out in April 2013.Pre-order from me - if you'd like the book signed, please add this in the Special Instructions sectionPre-order a copy from Waterstones