They were there again yesterday as bold as brass; circling the churchyard, trawling for recruits, secret agents under their thin Christmas disguise, masquerading as Santa’s little helpers, sweeping up victims one at a time and taking only a circuit of the churchyard to gain followers for life. They knew what they were doing, and they were doing it in broad daylight, under the gaze of fully consenting parents.
Flashbacks washed over me like a tsunami as I bore witness to unsuitably dressed children lured to a few moments of seemingly innocent pleasure, their eyes wide, in a winding queue impatient for their turn, excited and breathless. Volunteering to be suckered in, their unsuspecting parents paying for the privilege, well oiled from mulled wine from the adjoining Christmas Fair and snapping away on their iPhones to record the moment for Grandma. To all intents and purposes a harmless bit of fun ‘for the kiddies’. Merciless, that’s what it was.

But I’ve got their number.

The perpetrators? Two oh-so-cute black Shetland ponies, carefully chosen for their furry appeal and their professionalism in knowing exactly how to work a crowd. A two-pronged attack at that –felt antlers wafting in the breeze, red pom-pom noses stuck to bridles, a ploy to sweep up any recruits unimpressed by mere equines. Oh the sheer nerve of it.

The queue grew ever longer, future participants blissfully unaware of the real purpose, of what was to come. Those furry secret agents with their big eyes and their fluffy manes beckoned to a life some could consider glamorous, of galloping with the wind in your hair (not now love, get this helmet on) and of looking sexy in skin-tight breeches (best not look in the mirror), of controlling a quivering, powerful half-ton of horse who loves you unconditionally (but you’ll need to find a wall in which to ram it in order to bring it to a halt, and it’s likely to rub your jodhpurs to shreds against it – if it hasn’t already bucked you off in the mud). 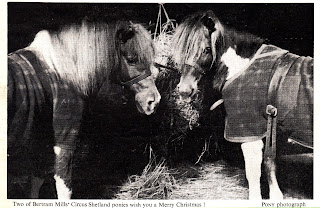 Let there be no mistake: unless you’re loaded this innocent-looking treat leads to nothing but a lifetime of forking out for never-ending riding lessons, livery, vets bills and miscellaneous sundries – all for the love of horses. This, my friend, is where it starts. The trembling thrill of sitting astride the saddle, of entwining course horse hair around ones fingers, patting a warm neck and feeling soft lips brush against ones fingers as you offer a carrot – it all begins here. An instant hit that hooks you in and maps out the rest of your life. More intoxicating than alcohol, more addictive than drugs, it entices you with a £3.50 amble around the churchyard. Before you know it you’re working all hours to feed your habit, mucking out in the dark, upgrading your tack on an annual basis, reluctant to acknowledge that the reason your electricity bill resembles the national debt of a third world country is because your washing machine runs for 24/7 to keep the horse clothing up to scratch against the scrutiny of other owners at the yard.

Oh I’m onto them all right.

Not that it will make any difference. Once you’ve wised-up it’s too late, you’re hooked. And they know it. Ruthless, that’s what they are.

I just wish I were able to re-live it all again – the wonder, the thrills, the passion. What begins with a sit aboard a fluffy Shetland roller coasters you through the rest of your life, casting sanity and commonsense aside, leaving normality in its wake, an unstoppable adventure to bewilder the uninitiated, a madness never lost. Who knows how many life-changing rides will be given this Christmas? I only know I wouldn’t change a thing – and I envy those being lifted onto a fluffy black Shetland.
Get ready for the ride of your lives!