Regular readers will know that I was a fan of Victoria Eveleigh's books in their self-published guise. She's now been taken on by Orion, and the books have been re-issued. They have had a bit of a re-write; the technology has now been updated (still no mobile signal on bits of Exmoor though) and the narrative feels tighter than in the books' original incarnations. The illustrations have mostly gone, to be replaced by chapter headings by Chris Eveleigh. I do like the new look; the cover photographs were taken by someone who had been well briefed, and are refreshingly free of glamour and sparkle.

The stories remain substantially the same, and I was pleased on reading them to be reminded only of how much I liked them the first time round. The background of Exmoor is outstandingly authentic: never are you in any doubt that the author knows Exmoor, and farming, like the back of her hand. Katy and her family are wonderful creations, and completely believable, as is the portrayal of their life. I particularly love the scene in the auction ring (which was a big favourite with my daughter when she read the originals). It is so well observed, and made me laugh out loud.

Katy is the daughter of a farming family, who are struggling to keep afloat. Her grandfather bred Exmoors, and the herd still live on Exmoor. On her birthday, Katy, who has to share her celebrations with the needs of the lambing shed, wanders off and finds a mare with a very new foal. She immediately decides this is the foal that she wants, and her father agrees, as long as the foal passes the inspection process to be a properly registered Exmoor pony. What can go wrong? The herd's offspring are always registered. Of course something does go wrong. How the problems are unravelled makes an entertaining and amusing story. The sequel, in which Katy has to face the fact her best friend is about to go off to boarding school and doesn't appear to be too sorry about it, is just as good.

The only disappointment I felt was that Orion have only issued the first two books, and it won't be until June that the third book in the series appears. Midnight on Lundy will also re-appear then, as A Stallion Called Midnight.

Orion have picked a winner, and I hope Victoria Eveleigh goes from strength to strength. Her next series will feature that endangered creature in the pony book: a boy hero.

Diana Kimpton: Dr Horse
Scholastic, £6.99
Thanks to the author for sending me this copy. 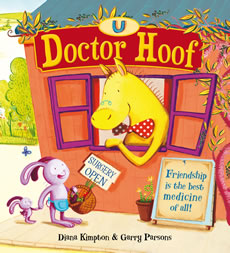 Doctor Hoof is a picture book for the youngest reader. It has a very simple story: Dr Hoof has set up in business, but is only prepared to treat horses. Of course, this approach soon runs into problems - the town only being a one horse town, and Dr Hoof being that horse. Dr Hoof gradually learns to open his horizons. There's a nice sense of progression and fulfilment in the story, and the illustrations are lively. My criteria for a really good picture book is whether I could stand more than 10 readings (both my children were strong proponents of the "AGAIN" school), and I'm not sure this comes into that category.
Review