- June 26, 2009
I recently bought volume 8 of the Ponies of Britain magazine, for Autumn 1970, as part of my continuing researches into pony book authors and illustrators. 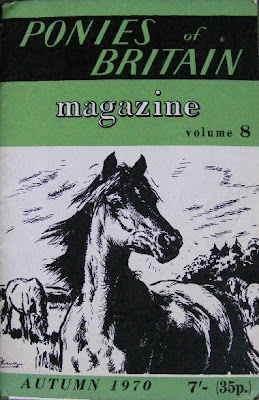 Here it is, with a rather charming cover picture by Joan Wanklyn. It's amazing how much more people like Joan Wanklyn and Carol Vaughan did for the equestrian world than you would think if you simply went by their bibliographies. There are very few Pony Club or Pony Magazine Annuals without a story by Carol Vaughan. Joan Wanklyn was a regular judge of the annual Harry Hall Drawing Competition in Pony. Not only did she judge, she also produced a two page spread for the magazine commenting on the prize winners. And here she is, illustrating the POB Magazine.

The POB Magazine, is, of course, crammed with pictures of delectable show ponies. I used to have a game I played, which I'd quite forgotten until I saw this magazine. I would go through magazines studying all the photographs, pretend I'd been put up against a wall and told I HAD to have one (what a dreadful fate), and choose a pony. Here's my choice, though he was run a very close race by the Dales mare Robertland Lady Scattercash, and the Highland stallion Turin Hill Angus Iain: 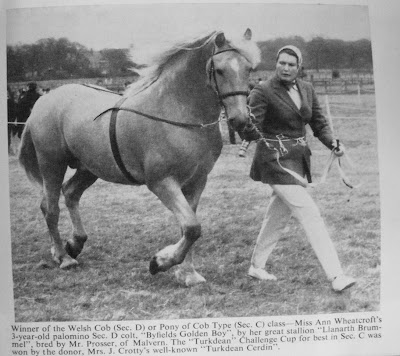 Now I think about it, there's a bit of a difference between my choice now and the delicately legged show pony I would have chosen when young. Now I seem to have gravitated without a second thought to those natives that can carry weight...

I did enjoy the photograph below. To the left is the Chairman, the formidable Mrs Glenda Spooner. In what is a staggering example of ignoring the obvious, the caption says "The Chairman looks on...." Well, yes, but certainly not at Firby Fleur de Lys and her connections. Maybe Mrs Spooner had spotted a distant Caroline Akrill (which pony author she banned from Ponies of Britain) skulking in the distance. 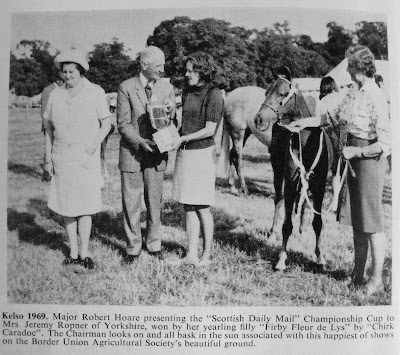 I don't know if big shows still go in for Fancy Dress, not having been to one for a while, but it certainly was quite a thing in the late sixties. I loved Prince, disguised as a saddleback pig. It looks as if he has trousers on - what a noble pony. I can't help but wonder what happened if the pony needed to have a pee - were there spaces in the right places? 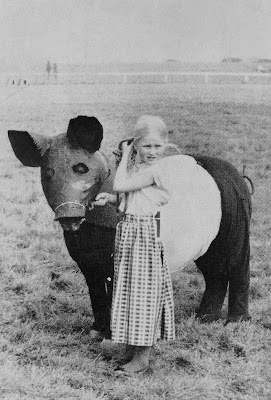 There was a Group class, and this is the Meade family with their Owl and the Pussycat. I love this, though I would not have been happy at being the child who had to be the turkey. 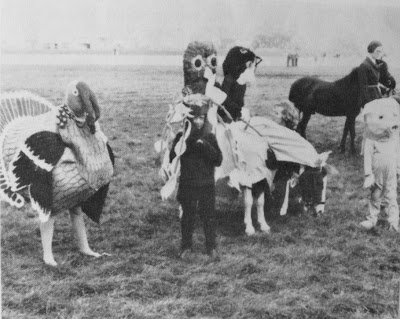 Best of all was Welsh Cob Ceulan Mandarin, all his finer points completely covered by his mammoth costume. He was also accompanied by an Ancient Briton, baby, and a little deer (a dog?), and his owner, Mrs Thrower, who directed operations on his back underneath the mammoth skin! When the trophies were presented she emerged from beneath to receive the honours. That must have worried any ponies still standing: Ceulan Mandarin was completely unconcerned by his odd appearance, but it had already "caused considerable alarm amongst the other competing ponies!" The mind can only boggle. 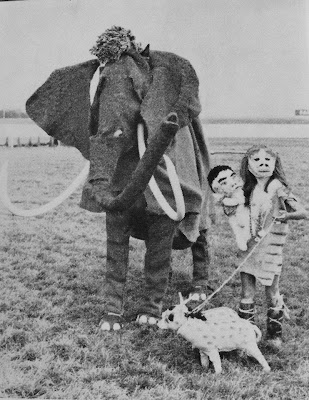 One advert also brought back a memory. I am of the age where rugs came in fairly limited forms. For outside, the New Zealand. For night, the jute rug; for day the wool day rug or Newmarket, and for summer the summer sheet or anti sweat rug. That was it. Now, the average horse is probably better clothed than his rider, and sale adverts talk of the lucky horse coming with his "wardrobe" of rugs. As far as I can remember, the harbinger of all this; the sign of things to come, was the Lavenham rug. This unattractive beast was made of nylon, ripped in about 10 seconds, and looked appallingly sordid after the horse had spent a night in it. Jute somehow never seemed quite as vile when covered in horse muck as the Lavenham did. 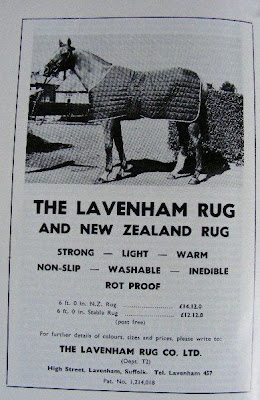 You'll note from the ad it mentions nothing about being rip-stop. Ha. Anyway, that was it: the first in the barrage of new rugs which now come in different deniers, with optional neck cover, and in a positive galaxy of different prints and colours. I can't help but hanker after the days when a horse's rugs weren't fashion statements. Mind you, scrubbing a jute rug was never fun, so something that can go in a machine has to be good. In passing, I wonder if anyone still makes jute rugs?

Some things, however, do not change. Elwyn Hartley Edwards, in his article The Lost Potential, says:

"Top of to-day's "in" words to be used when advertising a horse or pony for sale must surely be the word "potential". If it isn't then it runs "bombproof" a prettty close second. Every other young pony in the "For Sale" columns is ... a "potential winner...."

The letter of the week in Horse and Hound a couple of weeks ago made exactly the same point. Every animal in its For Sale columns, she said, seemed to be a talented beast sure to go to the top. Where, she asked, were the ordinary horses and ponies?

And another current hot potato in the showing world really isn't that new either. Fat not fit seems to be the fashion now, but in 1970, EHE said:

"How many of the ponies seen in show rings today carry a roll of fat like a bolster across their shoulders!"

To say nothing of being worked in side-reins....

Anonymous said…
Love the fancy dress pictures; that mammoth is amazing.
I smiled at your rug comments: I've recently returned to riding after twenty years and find myself fascinated by what the fashionable equine is wearing this year. Modern lightweight rain macs definitely beat New Zealands, I remember well the effort involved in throwing a blanket-lined New Zealand over a 17.2 horse.
Joanna
27 July 2012 at 19:08