- June 04, 2009
A while back I interviewed Caroline Akrill about her books: acute observers will have spotted that there was a great gaping hole where the Silver Bridle series wasn’t. This was nothing to do with Caroline: it was all to do with the fact that I hadn’t read the books recently when I was thinking of what to ask, and so hoped to draw a veil over my ignorance by asking nothing. Anyway, I do still have a few bones of academic respectability about me, about which I hope my tutors would be proud, though I think they would perhaps goggle a bit to find out their former student now applied that rigour to the pony book. But I digress.

The Silver Bridle series was Caroline’s last published fiction. The story of struggling actress Grace Darling and her journey towards success, via learning to ride, was written after Flying Changes, which is the dark tale of the obsessive and manipulative, and ultimately destructive Oliver. “When I wrote Flying Changes”, Caroline said, “Arlington had sent me off to ‘write what you like’ for my next book. So I wrote Flying Changes, not really intending it to be a teen read pony novel. When they read it they were horrified (believe me, it was much, much darker than the version that finally appeared) and so were Granada who had bought the paperback rights after the success of the Eventing Trilogy. So, much against my better judgment, I had to take out the darkest bits and tone the rest down! I do like the darker side and started to write a vampyric novel once – I may finish it one day!” This got me thinking, and I told Caroline about my daugher’s addiction to the Twilight series by Stephanie Meyer. Maybe, I said, you could have a vampyric horse, and thinking about it I do rather fancy the Fanes as vampires. They’d do it with style. Caroline agreed: “The Fanes would make rather good vampires!” So there’s a thought. Maybe Fidra, when they re-issue the Eventer’s Series could run a competition to suggest what the Fanes could do next…
After this, the Silver Bridle trilogy of novels was a complete change of direction. Collins, the publishers of Armada paperbacks, commissioned Caroline to write a trilogy on horses and acting, accompanied by Peter Aykroyd’s Gymnast Gilly trilogy, and a ballet trilogy. Although Caroline didn’t have any stage experience herself - “I don’t think I have an inner actress, but my daughter went to stage school so it must be in the genes somewhere!” she was able to draw on a lot of expertise. K M Peyton’s Flambards stories had been made into a television series, and she and Christine McKenna, who played the lead, Christina in the Flambards series, gave her a lot of technical background. “Chrissie helped with some of the technical acting bits & location work, as did Kathleen. Howard King is a lighting engineer and he took me on a tour of ‘television city’ and gave lots of advice on filming and lighting. John Cotton, my cousin, introduced me to Howard. Anthony Stafford, another cousin (an actor) read bits for authenticity, and Sylvia Stanier, a dear friend, trained horses for film & circus work and advised on that.” Caroline’s equine career has been very varied: she’s run a riding stable and worked with show ponies, so I wondered if she’d ever been tempted to train horses for film work. “I never wanted to train horses for film work – they tend to be regarded by some directors as expendable!”
Like Caroline’s other stories, the Silver Bridle stories have a classic romantic hero in Anthony, owner of the Moat Farm Stables where Grace is sent to learn to ride. Romance is something that now it is very difficult to publish a pony book for teenagers without. How times have changed. When Josephine Pullein-Thompson wrote Pony Club Camp, in 1957, in which Noel and Henry probably – it isn’t actually definite – kiss, very chastely, right at the end of the book, her publishers, Collins, were horrified, and told Josephine to write no more of the series. “This liking for a series about Peter Pan characters was common in publishing at that time,” said Josephine, “whereas I saw them as real children and took pleasure in knowing them as they grew up.” How times had changed by the 1980s. Was there any difficulty with having romance in the series, I asked? “I was actively encouraged to get into the romance in the novels,” Caroline said. “I think things have moved on since the Pullein-Thompsons, and look how Harry Potter has grown up!”
The Silver Bridle books were Caroline’s last published fiction. The books were re-issued, in one volume called The Silver Bridle, by J A Allen. Caroline became their Chief Executive, and started a project to produce pony fiction. “Allen had always been about quality and we wanted to elevate the status of the pony novel, engaging the top writers, the best illustrators and with our usual high production standards.” I wondered why Caroline had picked the Silver Bridle trilogy as her contribution, rather than her other books. “All of my other books were still in print so The Silver Bridle was the only option for the Equestrian Series and I did so want to be represented! I didn’t have the time to write anything new.” 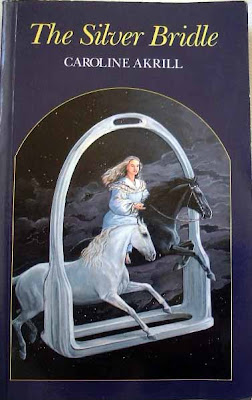 And so Grace finishes the story with what looks like a hit TV series, and her man. To me, the series doesn’t have the same feel as the Eventer’s series: it seems more finite. With the Eventer’s series, I felt that there were still plenty of places for the characters to go, and that there was lots of room for a sequel. The Silver Bridle trilogy seems complete: although I guess Grace and Anthony could maybe go on and work together, the ending as it is seems enough. Did you feel differently about the characters, I asked? Was that it for Grace, but did you feel you could go on with Elaine?

“You are right, there is still potential with the Fanes and Elaine, so they could go on if there was a demand, I suppose. The characters are easy to write about and they developed rather easily, I’m not sure why. They seem to remind everyone of someone, and they have a sort of raffish glamour in their own inimitable way. They are incredibly self-centered and exasperating but one does become fond of them – I think of them with affection – and gratitude!”

So, despite this being an article on Grace Darling and her story, the Fanes have elbowed their way in again. What do you think – is there a market for more Fanes?
Pony Books - Interview

Liz said…
It's a pity that Caroline was discouraged from unleashing the darker side of her imagination. Maybe now vampires are 'in' she could write something dark - not necssarily vampires, though.

I'm not sure about the idea of returning to past successes and trying to continue them, though. I was very disappointed with Margaret Biggs' new book about Melling; it really was nowhere near the standard of the old ones. And I rather hope Anne Digby doesn't get tempted to write about Rebecca in the sixth-form. Time passes and changes things. I'd like to see Caroline writing something new rather than revisiting her old universes. I'm sure I'm in a minority, though.
6 June 2009 at 00:15

Jane Badger said…
Yes - I'd love to see what Oliver's story was like before it was toned down. I have to say I think the Fanes would adapt to this century with aplomb, and having a stable full of vampire horses would make for interesting plotlines. Perhaps you'd encourage all those nice young helpers to stay beyond dark, and just think of the possibilities of a Midnight Ride.
7 June 2009 at 10:27

Joto said…
Definitely a market for more Fanes.
Also I agree that its a shame
Caroline was discouraged from writing "darker" novels.
19 June 2012 at 12:51

Anonymous said…
I would love to see more of the Fanes, there such a fun family then theres Alaine and her dad.
4 May 2017 at 10:53