I Rode a Horse of Milk White Jade


The author's profile on Simon & Schuster


If you count a pony book as one in which girl gets pony (or horse) against all the odds, then this definitely is one, thought not one set anywhere most readers would recognise. This is a story set in the 14th century Mongolia of Kublai Khan, on the Steppes populated by nomadic groups and their horses. The book is told in flashbacks by Oyuna, who when the book opens, is a grandmother. As they watch a foaling together, Oyuna tells her grand daughter about her childhood. Oyuna's foot was crushed when a mare trod on her, and after that she had to fight against what her parents saw as bad luck. What she longs to do is find a horse fast enough to win the long race in the festival at Karakorum. The horse she finds is not the conventional speedy speed: it is an aged white mare, Bayan, and Oyuna chooses the mare after she hears her speak. 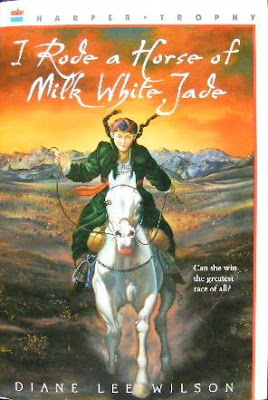 You might think then, that this book is a talking horse fantasy souped up with an historical background. It is not a fantasy: although Oyuna would love Bayan to speak to her all the time, she doesn't and the moments they communicate are quite rare. The most magical happens just after Oyuna and her father have bought Bayan, when Oyuna suddenly experiences the world through the mare's eyes, ears, and even sense of smell.

"... I even heard the water rippling away from one crane's plunge after a fish. And then, as I held my breath near to bursting in amazement, the even softer scurry of tiny mouse feet through the grasses tickled my ears."

This I found more believable than the raft of fantasy pony stories with mystical ponies. There is nothing mystical about Bayan: the great thing about their comunication is that it happens so seldom it is actually more believable: just occasionally the world of human and horse intersect. I felt it was such a small shift from what you do with your own horse, when you are standing there with them and feel that with just the tiniest shift in reality, they could speak. This book makes that tiny shift.


The talking is absolutely not the main focus of the story: Oyuna uses Bayan to overcome her bad luck. Her society sees luck as an outside agency, which you must take every step to propitiate. It is something that happens to you, and to which you react, and not something which you can influence (which I suppose is actually quite similar to a phrase which always makes me twitch "Oh, it was meant to happen." Not necessarily.) Oyuna has begun to see there might be another way of looking at life, and then her shamaness grandmother, Echenkorlo, visits, and she has quite other ideas:

"You want to ride the race and win. To capture good luck and ride it home. But I ask you, Oyuna, my grandchild, do you not see both good luck and bad luck around you always? Can you not reach out," Echenkorlo said, extending her open palm before me, "and take either good luck or bad luck into your hand?"

From this point, Oyuna does make her own luck. Although she moves away from what her society expects, it doesn't reject her. I don't know enough about Mongolian society to know if it really was flexible enough to absorb Oyuna's journey and behaviour, but it seems entirely believable, as Diane Lee Wilson portrays it. She never patronises a very different world view, but shows her heroine remaining within her society.


Diane Lee Wilson takes you inside the head of a Mongolian herder girl and make you quite comfortable there. Oyuna herself is such an attractive character. She's not bumptious, stroppy or unbelievable: she is extremely strong willed, but managed to combine this with humilty: in fact the whole cast of chracters is a delight, from the little cat Bator through the Emperor Kublai Khan to Genma, head of the arrow station.


This book should really have a much wider public than just those who like their stories with added horse: I found learning about such a different society completely fascinating, and Oyuna's journey had me rivetted. The horse element is central, but the author allows her characters to move and shift throughout the story, and doesn't tether them so ruthlessly to the equine world that they are nothing more than plot elements allowing the horses to appear.
Review