- October 06, 2018
I'm delighted to welcome the next castaway on the desert island where books are allowed. But not many. Linda Newbery has been one of my favourite authors for years: if you haven't read her The Damage Done or The Nowhere Girl, or The Shell House, or Lob, you are in for a treat.

Linda's latest book is The Key to Flambards, which the acute will spot uses the name of a very well-known series indeed: K M Peyton's Flambards. That is because this book tells (with the blessing of K M Peyton) the story of Christina's descendants, Grace Russell, and her mother, who are visiting Flambards for the first time around a century since we left it in Flambards Divided.

I loved it. The more I think about it, the more staggerered I am at how well it weaves together the Flambards we all know with the modern day.

So it will not surprise you to learn who wrote one of Linda's choices ...

This has been a difficult though enjoyable task; I’ve dithered and changed my mind several times (though in no doubt at all about the one I’d happily shred to pieces). I had to include a K M Peyton and a Monica Edwards and Black Beauty, which left just two more places, which was where the problem lay – so I’ll cheat a bit by mentioning others that were in the running. Patience McElwee’s Dark Horse? Sheila Chapman’s The Mystery Pony? A Dick Francis, or a recent impressive surprise, Maggie Stiefvater’s The Scorpio Races? And how could I leave out Ruby Ferguson’s Jill, whose books I read out of order, starting with Rosettes for Jill? In the end I didn’t find room for Jill, knowing that she’ll appear on many another list. I’ve listed these in the order they entered my life.

I first read this at the age of seven – in an abridged, illustrated version I remember so clearly that I can still see the pictures. Nowadays I think it would be considered quite a harsh read for a child so young, and I certainly grieved over the fate of poor Ginger, as surely all readers must. Later I read the unabridged text and was horrified anew at the cruel treatment endured by Black Beauty and other carriage horses in Victorian London, and the random chances that govern the fate of an animal that can be bought and sold. I think reading Black Beauty at a young age, together with Bambi and Tarka the Otter, had marked and lasting effects on my attitudes towards animals and human responsibility for them. 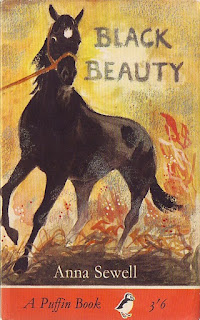 I first read Monica Edwards at the age of seven or eight, starting with Wish for a Pony, and I owe her my early ambition of becoming a writer. When Armada paperbacks began to appear I bought them for myself, and this was the title that introduced me to Lindsey and her family in the Punchbowl Farm stories. I was captivated by the Punchbowl Farm setting and Lindsey’s life there – riding to school, helping Dion on the farm, watching badgers and deer in the Punchbowl. This was the only one of her books to be illustrated by the renowned wildlife artist Charles Tunnicliffe. Although his depictions of horses and riders in action were somewhat awkward, he captured the Jersey calf Punchbowl Midnight most beautifully, and that’s what I remember. This story includes the first meeting between Lindsey and Tamzin of the Romney Marsh stories, leading to several novels in which the two sets of characters interact. I loved the sense of place in Monica Edwards’ novels, helped by the frontispiece maps as the books went on; the Devil’s Punchbowl and the village of Westling (based on Rye Harbour) felt real to me. Well, they are real, and so skilfully evoked in all weathers and seasons by Monica Edwards that I felt I knew them intimately. Another aspect of her writing I admire is that she engaged very early with conservation and welfare issues we’re all aware of today: oil pollution, intensive farming, captive dolphins. She was a pioneer environmentalist. 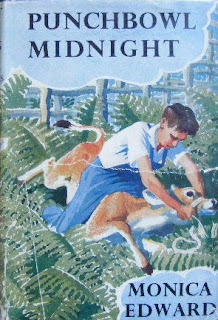 Riding with the Lyntons by Diana Pullein-Thompson

I read my way through most of the books by the three Pullein-Thompsons, though I preferred Diana and Josephine (All Change was another contender here) to their sister Christine, for reasons explained below. All three often wrote about large horsey families but here the focus is on an only child, Lesley, who’s befriended by the confident Lyntons when she and her parents move to the countryside. They conveniently have a spare pony for her to ride and all goes well until an open gate leads to one of a pair of Dartmoors being fatally injured on the road, for which Lesley is blamed by the Lyntons and by herself. Diana Pullein-Thompson writes convincingly about Lesley’s longing to be accepted and about feelings of guilt and loyalty. I also liked Lesley’s arty parents and the glamour of her father being a writer, whose unexpected success leads to her being able at last to afford a pony of her own. 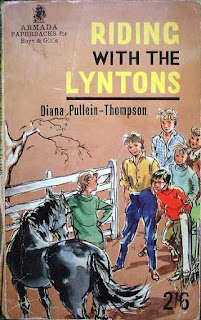 The Perfect Horse by Gillian Baxter
This was the first of several Gillian Baxter novels I read at the age of twelve or so, and she impressed me at once with her delineation of human and equine characters and their settings and interactions. This was part of a sequence about Bracken Hill Stables; I read them out of order, but that didn’t affect my enjoyment. Here, main character Bobby, employed by Guy who is now also her fiancé, is tasked with training her cousin Ellen and her supposedly perfect horse, Minos, to top-class eventing standard. It’s years since I read it, but I seem to remember a handsome and dashing male rider, Jay, who vies for both Bobby’s and Ellen’s attention. (I’m sure Jane Badger will know!)*
Gillian Baxter is very good on the conflict between ambition, privilege and exploitation on the one hand, and fairness, consideration and well-earned reward on the other. 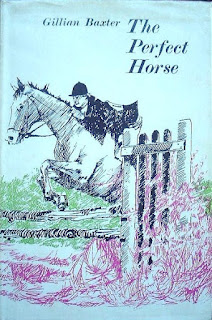 Prove Yourself A Hero by K M Peyton
It’s difficult to choose a favourite from K M Peyton’s impressive output, but I’m going for this: one of a series involving Jonathan Meredith. Peyton is good on teenagers resisting the demands of pushy parents, and Jonathan’s mother is harshly unsympathetic: when he’s kidnapped and held prisoner until a large ransom is paid, she blames him – for being taken hostage in the first place, and for failing to escape. Jonathan must redeem himself, which he does with the help of loyal friend Peter McNair, son of a horse-dealer. Horses feature largely in the rescue and afterwards in Jonathan’s restoration of self-esteem. No one writes about horses better than K M Peyton: they snort and breathe from the page with personalities to match the human cast of their stories, and the reader shares the exhilaration of forming partnerships with them. She is also very good at names: Florestan, Sweetbriar, Woodpigeon, Dogwood, Drummer and Toadhill Flax are among my favourites. 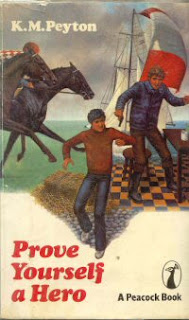 And the one I’d chuck into the sea … (no, of course I wouldn’t. The sea has more than enough rubbish in it.)

A Day to go Hunting by Christine Pullein-Thompson
Even as a child, I was bemused by the doublethink that encouraged readers to lavish care, attention and consideration on horses and ponies while apparently feeling no qualms at killing another equally intelligent mammal for sport. It always bothered me when characters I otherwise liked saw nothing wrong with riding to hounds, and I’m pleased that I resisted what almost amounts to indoctrination. For this reason I never liked Christine Pullein-Thompson as much as her sisters; hunting is certainly mentioned in their books, but in this title of Christine’s, it takes centre stage. 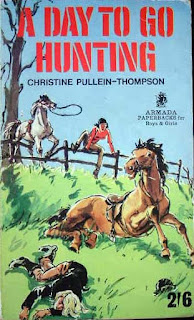 What really angered me here was the hunt master’s airy dismissal of a landowner’s concern that her deer have been frightened by invading hounds: he thinks she’s petty and unreasonable for worrying about her “precious deer”, as if she has no right to protest that her animals have been terrified and endangered on her own land. However, he calls round and quickly wins her support. How improbable is that? If I were her I’d take legal action.

At least a book like this would never find a publisher today. Other Pullein-Thompson stories endure, but this one, with the uncritical sense of entitlement shown by its unappealing characters, belongs firmly in the past.

* Jay does indeed appear in The Perfect Horse. He wears a red-and-yellow spotted cravat, which in my mind is something truly hideous.
desert island pony books Linda Newbery