- August 05, 2015
Patricia Leitch, author, died on 28th July 2015. She wrote over 30 pony books, but she was anything but a genre writer. With A Dream of Fair Horses, and her Jinny series, she wrote books that transcended the usual girl plus pony story. Pat's heroine Jinny and her wild Arab mare Shantih were not the wish fulfilment that many pony book heroines are to their readers - the people who have what you most want in the world. Jinny was far more than that. To many of her readers, Jinny spoke directly to their hearts and souls. Her struggles to understand her world were theirs.

Many people have written about their feelings since Patricia died, but the one that went straight to my heart was written by Sian-Valerie Shipley:

"Patricia Leitch, there aren't words for the things you taught me... Courage, stubbornness, tenacity, a willingness to accept my own fallibility, and most of all, the deep and abiding love of a horse. I cherish every letter we exchanged. Wherever you are, know that every time I ride, every time my horse flies beneath me, I will think of you, you and Shantih will be with me, closer than breath."

Pat's funeral was held yesterday, 4th August, and Pat's relation, Maureen Russell, gave the following tribute, which I reproduce below, together with pictures of Pat Maureen has very kindly sent.

Pat was a supporter of the Hessilhead Wildlife Rescue Centre, and it was the charity her friends chose for donations in her memory. You can reach the charity here.

Pat was born in the Brabloch Nursing Home in Paisley, which later became a hotel, and the family lived in Hagg Crescent, Johnstone. Her sister Anne came along nearly three years later. The family moved to Cheshire and then Anglesey. Pat had a grammar school education and not surprisingly shone at many subjects especially English and Art. Pat and Anne grew up and led independent lives. Pat was devastated when Anne died of cancer when she was 40. Losing her only sister was a terrible blow to Pat and she carried the heartache for many years. 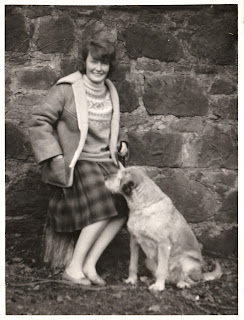 Pat’s character [was like] Jinny; strong willed, adventurous and brave - and perhaps she really was the Arab mare Shantith – never truly tamed, spirited and free. In the last decade when her health began to fail Pat struggled to come to terms with the loss of mobility and her independence. There was no compromise to be made with the frailties of the body – but Pat’s spirit could not be quenched – she always remained essentially the same Pat. 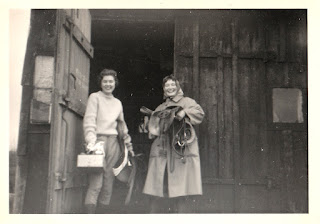 Going to church was important to Pat. For many years she was a member of the Old Kirk and switched to St Fillan’s – I guess for more practical reasons than religious –I was giving her lifts! Pat made many friends in both churches. She had a deep faith; she questioned and probed Christian teaching, not taking it for granted – she would catch the minister at the church door and probe them on one or two points – keeping them on their toes!

Pat kept in touch with friends. Those further away she phoned regularly. Pat was prolific in her correspondence – she liked pen and paper and disdained emails and text messages! Pat received letters from fans of her books from all over the country and abroad. She had a particular friendship with Heather, a prisoner in England. Pat loved children – she had the gift of communicating with them, delighting in them and they responded to her. Pat knew our grandson Kyle, now nearly 7, from an infant and delighted in hearing the stories he made up. Not having family members herself, Pat’s close friends were her family. She cared deeply about her friends as they did for her. During the last seven months Pat was wonderfully looked after in Woodside Care Home at Quarriers. She came around to seeing she needed their round the clock care and found peace and won the hearts of the staff there.

Kathleen Pennington [a longstanding friend of Pat’s], says she came across a quotation the other day from a book Pat gave her many years ago, which is so much Pat:

Speak to us of Friendship
"And in the sweetness of friendship let there be laughter,
and sharing of pleasures.
For in the dew of the little things the heart finds its morning
and is refreshed".

Pat touched the lives of all kinds of different people. Her work will live on in many, many people’s lives. She has left the world her wonderful books, her generous spirit will be remembered, and we are all the better for knowing her and loving her: I am glad she came into my life and it was a privilege to know her - God bless and thank you. Maureen

Unknown said…
Beautiful. She will be greatly missed. Never a day will go by when I do not think of her. When I look into my beautiful shantih's dark liquid eyes. I gave Shantih a squeeze today. She knew something was up. Animals understand something which Patricia totally understood. Thankyou for the jinny books, Thankyou for a childhood full of dreams and wishes Thankyou for my adulthood where dreams have come true. Xxxxx
6 August 2015 at 22:40

Paulette said…
Thanks Jane. I enjoyed that and lovely to see the photos. Pat sounds exactly how I imagined she would be.
7 August 2015 at 08:37

Malcolm Horne said…
I've only just come across this page, and I'd like to add a few words about Patricia. Regrettably I never met her, but we exchanged several letters in the late 1970s and early 1980s after she had subscribed to the vegan magazine that I was editing. We lost touch after that, but I always remembered her and it's no exaggeration to say that her letters were the most interesting I have ever received from anybody. She embraced paradox and uncertainty, and once sent me a cartoon of herself marching with the banners "Nevertheless" and "But". She also sent me her book 'The Fields of Praise', which I read (despite having no special interest in horses), and I could see the flashes of poetic prose and insight that I was familiar with from her letters. I wish now that I had known her a little better.
28 February 2016 at 12:13

Jane Badger said…
Thank you very much for your comment and for sharing your experience - it's great to hear of another side to Patricia. I knew she was a vegan, but had never managed to track anyone down who knew about that side of her in the way that you do.
29 February 2016 at 08:45

Malcolm Horne said…
Thanks Jane, I've emailed you Patricia's cartoon which I mentioned above. Our letters were slightly about veganism, but diversified into a number of other topics. She was interested in Jung and psychology, and simply in the business of being alive and making sense of things. She wrote very vividly, and an example of that can be seen about a third of the way down this page http://www.veganviews.org.uk/vv100/vv100earlyyears.html (where I included a few lines from her in an article marking the 100th issue of our magazine).
1 March 2016 at 15:59

Jane Badger said…
Thank you very much for this - her letter does seem quintessentially her, wondering about what she would do if she was not living a relatively comfortable existence. She was, I think, always honest about herself.
2 March 2016 at 18:41