- April 16, 2015
Julip Model Horses had the rubber (or latex) model horse field pretty much to themselves in the 1950s, but by the 1960s competition began to spring up from rival firms Isis, Pegasus and Otway, and Julip appeared thoroughly spooked by the competition. Their advertisements took on a distinctly panicky tone: “Beware of imitations!” they begged.

Otway and Pegasus, as far as I can tell, only lasted a couple of years, but Isis Products provided more sustained competition in the early 1960s. The company’s founder, Margaret Hughes Hartmann (1929–2006) grew up in the docklands of Cardiff. She desperately wanted to be a vet, but money was short, and her older brother’s education ate up what money there was. He eventually became a paediatrician. Margaret trained as a teacher, and then married Cyril Hughes Hartmann, an historian and writer, and contemporary and friend of CS Lewis and Tolkein. Cyril and Margaret’s daughter Carola was born in 1956: she was one of twin girls, the other of whom was stillborn. As was common at the time, the baby’s death was never spoken of. Carola had no idea about the existence of her twin until she was in her teens, although when she was very young, and learning to talk, her mother told her she would often ask where the other girl was. After her mother died, Carola found a sculpture of a baby’s head and shoulders, whose eyes, Carola said, “seemed somehow dead.” Carola believed this was the only way her mother could mark the death of the baby she had not been allowed to hold.

This sculpture was strictly for private consumption: the sculptures by which Margaret made her living were inspired by the passions of her surviving daughter. Carola loved ponies and Margaret began to make model horses and ponies out of rubber with manes and tails made out of real hair. Exactly when the company started, I am not certain. The earliest advertisements I have found are in Pony Magazine, and date from May 1962. They show what looks like an established range of horses and riders, and it seems likely that the company probably started a few years before this. Isis Products was named after the Isis River, on which the family lived, and at first were made at home. When the company took off, Margaret employed two staff, and moved the company to a workshop in the village of Eaton Hastings, near Faringdon in Berkshire.

The company had a small range of horses and ponies, riders and tack, made in the workshop, with jumps being made by a local supplier. The company sold their horses through mail order, and produced catalogues  which listed their models and accessories. I haven't seen a Julip catalogue from the 1950s, but the 1970s ones I knew were duplicated typed lists with not a picture in sight. 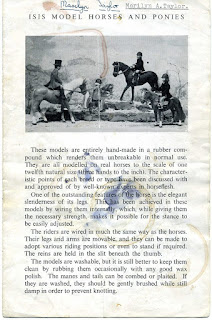 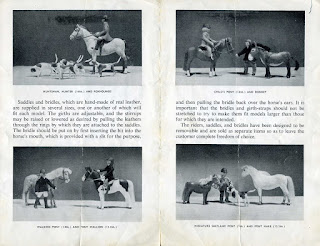 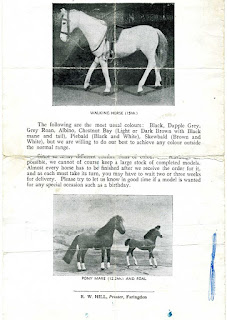 The models I’ve seen mentioned are: walking horse, walking pony, hunter, Thoroughbred, child’s pony, walking foal and standing foal. I have never come across any of these in the flesh (rubber?) and for an idea of what they actually look like have had to rely on the advertisements I’ve found in the equestrian press, and Pam Wakelam, Marilyn Sweet and Jane Bowell who have been kind enough to supply photographs of their own Isis models. Pam was able to provide some help on how to tell Isis from other latex models. They look, it must be said, a lot like Julip, but Isis ponies generally don’t have silver horseshoes painted on, which Julip almost always did. In addition, Isis models have flatter sides and bigger heads than Julip models, and paintwork which looks rather thicker. I like them: to me, the Isis models are more finely modelled and altogether prettier than most Julips.

Margaret Hughes Hartmann certainly seemed rather more clued up about the power of advertising than Julip. The earliest Julip advertisements I’ve found used photographs, but by the time the first Isis advertisements appeared in Pony Magazine in the 1960s, Julip’s advertisements consisted of text simply asking people to order early for Christmas. Presumably alarmed by the competition from Isis, and similar company Pegasus, Julip took out an ad in Pony in December 1961 which exhorted their readers to beware of imitations, but made no effort to compete with the other companies’ much more attractive advertisements. Julip still relied on the power of words alone.

Looking at the companies’ advertising strategies from 1962-1965 is instructive. Isis’s advertisements were all accompanied by attractive pictures, with beautifully composed backgrounds, showing off their range. Isis also outgunned Julip in other departments. Pony Magazine ran an annual competition, with prizes donated by publishers, riding schools, and of course, Isis. Julip contributed a prize in 1961 (a horse and bridle), but then donated nothing in 1962. Isis’ prize was a voucher for £2 2s. They continued to donate prizes until the company closed. Each year, they outdid Julip, and because their prize was more valuable, each year they appeared further up the list of prizes.

Both company’s products were also featured in editorial. It may seem odd to us now, but there was a time when Christmas issues of magazines appeared without a spread of horsey present ideas for you and for your family. In post-war Britain, with rationing in place, it is perhaps not surprising that these didn’t appear until Britain’s economy improved in the 1960s, with Pony Magazine’s first gift ideas feature appearing in 1962. Both companies were mentioned in the feature, and it’s fascinating to read just what was written:


... if you want less fragile specimens [than Beswick china horses] there is the unbounded range of ponies, horses, riders, stables – a whole riding stable or horse show – produced by Julip Associates, the pioneers in the field ... Other providers in this field are Isis Products.

Julip backed up their down-with-the-competition attitude with another “Beware of cheap providers” advertisement in the same issue – it was another effort restricted to text only, and appeared buried in the depths of the magazine. In contrast, Isis’s November 1962 advertisement was this very pretty scene, printed just inside the front cover.


Julip fired off another “Cheap Providers” ad in April 1963, and then reverted to text advertisements without feeling the need to snipe at the competition. There was less of it, as Pegasus’s last advertisement appeared in April 1962, after which the company presumably folded. Isis continued to expand, and in November 1963 put out their card game “Tack”, sold in WH Smith’s network of shops as well as directly from Isis. Alas, this, and their rather lovely "Yearling" money box, which appeared in 1966, seemed to be the company’s last hurrah.

I believe that Cyril Hartmann’s illness led to the slow winding down of the company, and Carola told me her mother wound up the company altogether when Cyril died in 1967. Margaret Hughes Hartmann went back to teaching, eventually becoming a head mistress. She never gave up sculpting. Sadly, few Isis models remain in the family after a disastrous house fire destroyed pretty well everything the family owned, leaving Carola with just her model donkey. The Isis model her mother made of her beloved piebald pony, which appeared on her birthday cake at her 12th birthday, did not survive.

Isis models provided a fascinating episode in the history of model horses. If her husband’s ill health had not forced Margaret Hughes Hartmann to wind up the company, it’s interesting to speculate just how major would have been the competition they provided to Julip. Certainly, with her keen marketing brain, and her thoroughly charming range, Margaret Hughes Hartmann deserved to succeed.

Many thanks to Carola Hartmann, and her husband Malcolm Cooper for the very considerable help they gave me with this piece. Carola sadly died in 2013 . She was a keen writer, and you can find some of her stories here.

Huge thanks too to Pamela Wakeham and Jane Bowell for supplying all the pictures of Isis models for this piece, and to Marilyn Sweet for the Isis catalogue.

You can see more Isis models on this link to the Equorum forum.