- August 06, 2013
The Yonahlossee Riding Camp for Girls opens with heroine Thea being shipped off to the Yonahlossee Riding Camp.  Thea’s family are rich Floridians who earn their money from citrus. The depression may have hit America, but it doesn’t appear to hit them. Something has though. It soon becomes clear that Thea is in disgrace. She doesn’t want to go away at all. She loves riding and horses, but she certainly doesn’t want to go away to a summer riding camp with the cream of Southern society. What she’s being sent away for, we don’t know. It’s one of this novel’s conceits that we don’t. The author has no intention of revealing all until we’ve done our time with the plot, but it's dragged, clanking, from page to page. You soon realise that it’s being dangled in front of you only to tantalise so she can say “Aha! Not this time.” Nor any time either for several hundred pages on, so the constant references to it have the effect of divorcing you from the story through sheer irritation.

And it isn’t as if the reasonably astute reader couldn’t work it out for themselves. There’s a girl. There’s a boy. 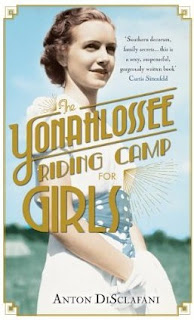 Thea has three main concerns in her life: horses, her twin Sam, and sex. I can’t say that this is a novel about a girl coming to terms with her sexuality, because I don’t think that she does. For her, it’s something she uses entirely selfishly, leaving a desperate wreckage in her wake.

I wonder if the author intends the reader to end the book loathing her central character? I was hanging on in there, clinging to the shreds of compassion and decency Thea occasionally shows, trying to find a reason for sticking with her, and then she rides in a jumping competition at the end of term. This is how she does it:

“I splashed through the water jump, felt Naari change her footing , and knew, as she collected herself in preparation for the oxer ahead of us – and then as she soared over it, her ears flat against her head in concentration – that we understood each other: I wanted to win, and she wanted to be rid of me, this confusing girl on her back, goading her forward with sharp pains on her flank, then holding her back with a terrible pressure in the corner of  her mouth; she tasted blood from the pressure of the see-sawing bit, which flattened her tongue against her tongue; made it difficult to breathe.”

“I’d ridden my horse too hard, with everyone watching. I didn’t regret that. I’d ridden too hard for this particular competition, but I’d won.”

So that’s all right then. At least the scars Thea leaves on Naari’s sides will heal. The catastrophic effect she has on the rest of her family will not. Thea I don’t think is consciously cruel, but she’s monstrously self-obsessed. As she returns home at the end of the novel, it becomes clear, as she is reunited with her family, that although she sees perfectly clearly what she’s done to them, she doesn’t much care. At the end she says, looking back at her life:

“At Yonahlossee I learned the lesson that I had started to teach myself at home: my life was mine. And I had to lay claim to it..... I was a girl, I learned, who got what she wanted, but not without sadness, not without cutting a swath of destruction so wide it consumed my family. And almost me. I almost fell into it, with them. I almost lost myself. But I was too selfish.”

Should a novel have a central character whom you like? DiSclifani is an elegant writer: the monster’s beautifully depicted, and she's certainly self-aware. That’s probably not enough. She’s merciless, is Thea, and unfortunately that leaves the reader feeling as screwed as the human wreckage she leaves behind her.

Linda Benson said…
I was quite disappointed in this book too, Jane, for most of the reasons that you stated. Although I struggled all the way to the end, I was then sorry that I had wasted my time. My full review is here on Goodreads: http://www.goodreads.com/book/show/16158508-the-yonahlossee-riding-camp-for-girls
6 August 2013 at 16:01

Anonymous said…
I was disappointed too. I don't think you have to LIKE a character, but I think if you're going to have an unsympathetic protagonist she should at least be interesting. Thea, sadly, is not.
11 August 2013 at 05:46

Jane Badger said…
Thanks Linda - off to read your review now - which I couldn't find! Do you review under another name? I couldn't find anything under yours.
21 August 2013 at 15:28