January and the tracing of the untraceable

- January 25, 2013
Over four weeks since I last posted. Gosh. The last few weeks have been very odd, and almost entirely eaten up by sorting out the illustrations for my book, and attempting to manage our house sale. The illustrations have now gone off to be typeset, complete with captions. Doing the captions was a walk in the proverbial park compared with attempting to track down artists. Some artists have taken me weeks to track down.

Here's how I tracked down the copyright holder for Janet and Anne Grahame-Johnstone (Puffin's 101 Dalmatians, Percy's Pony Annual; amongst many others).

Google Grahame-Johnstone, giving thanks that it is not a common surname. The first things to pop up are obituaries. Both twins have died, and this means copyright in their illustrations, in those cases where it wasn't sold to a publisher, will probably have been left to a relative. If this is the case, I can sometimes find a descendant by fossicking about on the family history sites. Neither twin had children, so that won't work here. I fill out a will request form.

Before I send it, I remember that a publisher wrote to me mentioning they had published some works illustrated by the Grahame-Johnstones. All I can remember about the email is that it was some years ago.

Search my inbox. Find an email from Award. Contact them, hoping that the writer of the email is still there and that the email is not pinged straight back. Success: she's still there. She can't recall who has the copyright, but thinks that they had a brother.

Back to Google. Google grahame johnstone + brother, and a name pops up. Google the first variation of the name. Nothing useful. Google the second variation: an art site comes up with a section under the brother's name, Captain E M G Johnstone. I contact the site, MagnoliaBox, to see if they have any contact details. They do not, but suggest I contact the publishers of the prints. I do, and bingo: they have contact details. I send an email on for them to forward.

And that's as far as I've got, but at least I know.

The Grahame-Johnstones were amongst the more straightforward. Others have been impossible to trace.

Others just pop into my inbox with no effort from me whatsoever, having found me via my website. It almost feels like cheating when an artist's family gets in touch out of the blue, though it is exciting finally to be able to ask all the questions I have mentally filed away as I've written. I will do a couple of blog pieces fairly soon on equine illustrators whose families have been in touch: Bonar Dunlop and Sheila Rose.  Here's a Bonar Dunlop to whet your appetite: 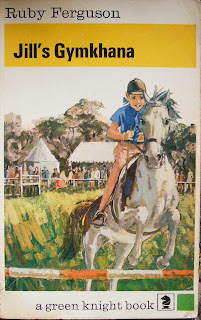 Christina Wilsdon said…
How fun. Even when a search reaches a dead end, there's a certain satisfaction involved in feeling like an international spy. But of course much more satisfaction when you connect the dots and find what you're seeking.
25 January 2013 at 15:45

madwippitt said…
Good to see you back - house presumably sold and move accomplished ...
Janet & Anne G-J ... I always used to wonder how you managed to do a joint illustration. Very distinctive style: first time I became aware of them was at age 9, reading Paul Gallico's The Man Who Was Magic (sadly out of print but would love a copy if anyone knows of one that isn't an outrageous price) and then being thrilled that J A Allen's annual Xmas card was a G-J painting.
25 January 2013 at 15:46

Fran Jurga said…
That's fascinating! It seems like so many of the publishers are out of business or have been swallowed up...so intimidating even to start over here!

Jane Badger said…
Janet and Anne did various bits of the illustrations - Janet specialised in horses, and when she died, Anne had to adapt and do them.