- October 06, 2011
I'm decorating the house for autumn.  Ha ha. Of course I'm not. It had never even occurred to me, I must admit, but I do every now and then read blogs where people do this.  I'm actually very glad that they do, as I like to look on at those wonderfully decorative lives that are completely, utterly and absolutely unlike mine, which is frankly rather pants at the moment, for one reason and another.

Even if I had the time, I know I wouldn't fill it with craft projects and decorating stuff, as what I do when I have any spare time is take the dog out and charge around the fields, or dive into a slowly rotting pile of ancient horse literature, seeking what I might find. Because that is my idea of a good time.  But I like to look at other people's crafts and decorative lives and appreciate what they do. Just as well we're all different, as I'd hate it if there was more competition than there already is when it comes to acquiring ancient and slightly smelly horse related ephemera.

Anyway. Stick with me, because there is some sort of a point to my ramblings. I get roped in to decorating our church at major festivals. Not because I can do flower arranging, because I can't. I am, however, younger than 80 and am well known for my inability to say no when asked to volunteer.

This usually leads to some strenuous brain work as I try and work out a way of decorating without actually arranging a flower. I have only to see oasis and buckets of shop bought flowers and I panic. So, this year's effort involved my trusty vegetable boxes and a lot of windfalls. As ever with my efforts, what is in my head bears no relation at all to what actually emerges.  I had visions of evenly spaced hop garlands, twining amongst the boxes, but couldn't make the hops, or my fingers, form my plan.  The dog, who accompanied me into church, had a fine time rescuing the apples that hurtled from above as I balanced on my step ladder. She eventually retreated underneath the ladder, which was sensible, as it was safer there, though no quieter, as my unchurchly swearing could still pollute her innocent labrador ears. 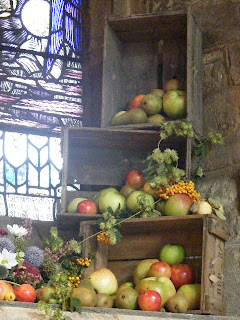 My other window involved even more swearing (I am ashamed) and some quite emotional deep breathing. I had visions of a wreath of hops surrounding my charming apple-filled basket. (I am not obsessed with hops - it's just we have an awful lot in the garden, and as I loathe the idea of spending money on flowers which I will wreck, my efforts are centred on what I can find at home.)  I was completely incapable of making my mental picture become reality, and ended up with hops strewn all around the altar after I had ripped them off in despair. The hops were pretty heady, and I was beginning to have severe doubts over whether having as many of them as I'd got was such a good idea, bearing in mind the bishop was coming to take the service, and was going to be taking it from my end of the church which by that point reeked of hop.
Ah well. 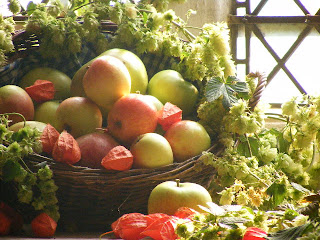 Other people do very much better than me, fortunately.  I love the more is more school, and particularly like this one, which is a triumph of abundance. 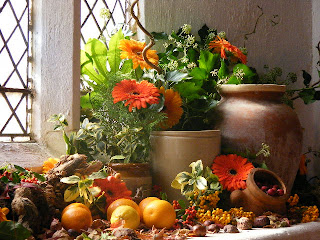 And these, particularly the vegetables, which are all home-grown. Proper harvest. 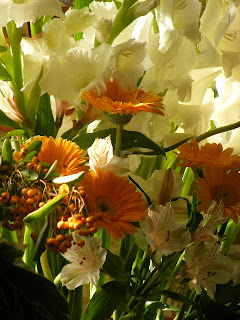 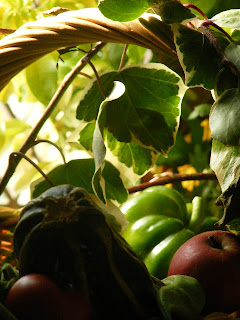 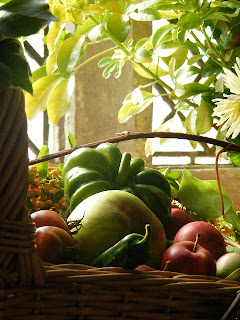 Christina Wilsdon said…
It's all QUITE lovely. You're lucky to have such a setting to work in! No hops all over the inside of your house!
6 October 2011 at 21:58

Jane Badger said…
I tend to forget how lovely the church is, but you're right. You're also right about the hops. I did once bring them into the house, but I suspect you're supposed to do something to them to make them into a hop garland. As I hadn't done it, the hops spent months slowly shedding, floating gently down to decorate the dog's basket. Drove my husband mad.

The mum of all trades said…
I wouldn't say you are not creative! That display is lovely. Love the idea of using the old crates for a backdrop.
You write very well.
7 October 2011 at 14:49

Jane Badger said…
Thank you mum of all trades! You have just the sort of blog I like to go and look at. Did like your recipe for apple cake, which I think I might well do tonight, recent gales having brought down lots more apples!
7 October 2011 at 15:17

Linda Newbery said…
Beautiful photos! And I love the idea of using apples, hops, crates and flowers from your garden. That is the spirit of harvest, rather than bought flowers arranged stiffly in oasis. Really lovely - I hope everyone appreciates your efforts.
7 October 2011 at 16:40

Jane Badger said…
Thank you Linda. Some do, some do. Some say, "Hmm, different." In these parts, that's Northamptonshire for "Peculiar. Distinctly odd. But I am too polite to say."
7 October 2011 at 18:28