It seemed like a good idea at the time

- February 11, 2010
In the days before my scanner breathes its last (its yellow stripes are apparently terminal) I've scanned a few more images in from Pony and Riding magazines. Riding wear stayed very much the same for quite a long period in the 20th century, helped by the Pony Club's insistence on what was the correct riding attire. There were stirrings, though. One which interested me in particular was the move from the elephant ear jodphur to the fitted type we have today. (In passing, does anyone have any idea WHY the elephant ear jodphur had the elephant ear bit? Did it serve any actual purpose?)
My very first jodhs were the elephant ear type, and my next were the riding trouser, a transitional trouser in between the elephant ears and the modern fitted type. In these ads, the riding trouser doesn't look too bad at all: more fitted; it's lost the elephant ears and as it has an elastic strap is less likely to disappear up your leg leaving your skinny ankles exposed to the evil Northamptonshire wind, but I never came across any of these. My sister and I both had riding trousers, after our mother was talked into buying them by the owner of the riding stables. The next thing, she said. Everyone will have them soon, she said. Maybe if they'd been like the Edwin Drostle ones below, they would have, but my sister and I were alone with ours. Poor sister's were even less prepossessing than mine, being an unattractive dung colour. Mine were at least an alluring putty, but both pairs were shapeless sacks with elastic at the bottom. 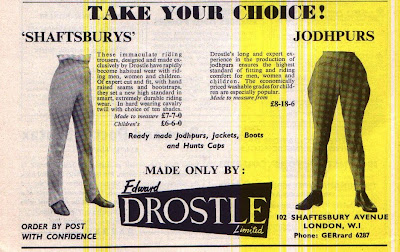 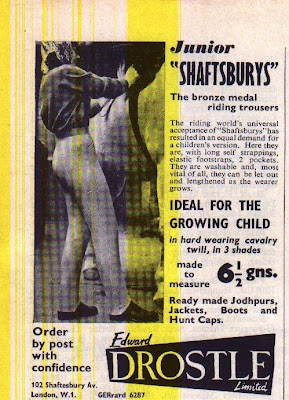 Phillips and Piper Ltd did pantaloons - I can't imagine they sold many with that name, but I wonder if that was what we had. 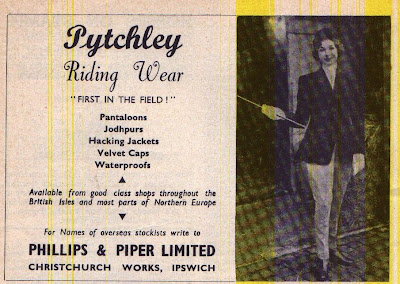 I never had the next horror visited upon me (only because the riding school owner didn't have one in secondhand, otherwise it would have been mine). I can't remember ever seeing one either, but it has a peculiar charm, the riding hat with the softer, more feminine line, in tweed. 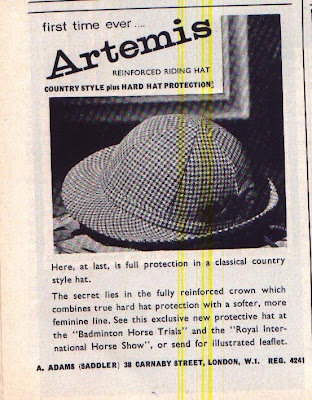 You would think that denim jodphurs were a horror only around in the 1980s (and I do have a Pony Magazine somewhere with an ad for these which I will post as soon as I find it). No - Rowes of Bond Street were selling the deni-jod in the early 1960s. They only came in regulation colours of fawn or brown, but they were denim, and their young customers insisted upon them, they said. Not for long, I suppose, as I can't find any mention of these jodhs in the mid 1960s. Having ridden in denim in an inter-jodh period, I know first hand the horror of riding in sodden, icy denim. However suited denim might be to the prairies, it's not at its best in rainy Britain.

I found an interesting correspondence in Riding Magazine, 1960. Wayne Saxton, an Australian, commented bitterly on the girliness of riding dress. The editor of Riding obviously thought this nothing but whining, simply withering poor Wayne with the observation that riding kit was worn by men before being copied by women, and each item had a "sound, practical purpose". 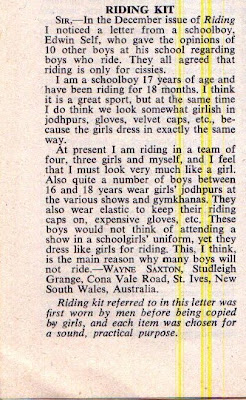 Mollie Helsby rode to Wayne's rescue in a subsequent issue. Her riding school had more boys than girls, and this she thought must be due to her not insisting on the correct riding kit. It's an interesting point. I wonder if boys still feel the same way? My son, when he had riding lessons, was very agin the idea of jodphurs, though quite happy to wear jodphur boots and a hat. 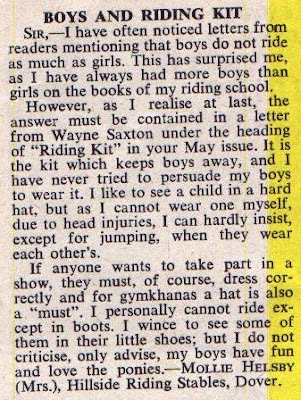 Goldielover said…
I always thought the elephant ears were there so the fabric wouldn't be so tight around the hips and upper thighs when mounted, and that this began to disappear as stretch fabric became more common.
12 February 2010 at 00:04

Jane Badger said…
That would make sense. I was very skinny in the days when I had my elephant ear jodhs, and they hung off me, so the niceties of cleverly cut fabric were a bit lost on me.
12 February 2010 at 09:43

andrea.at.the.blue.door said…
I agree with Goldilover. I have some 1920's home sewing patterns for elephant ear jodhpurs, one of which will measure about 54" through the hips for a stated hip measurement of 38."

Before stretch fabrics, and before the concept of sportswear really developed, jodhpurs (or breeches as they were often called in the U.S.) were often worn for hiking and skating as well as riding; all three activities requiring a lot of freedom of movement.
13 February 2010 at 04:23

Jane Badger said…
Thank you Andrea - I can see that now. It makes me wonder what the riding trousers in my piece were actually made of. Was the early 1960s too early for stretch fabric? Or was the fabric cut on the bias - I don't know a lot about tailoring (alright, nothing) but I can't see that that would have done it.
13 February 2010 at 11:21

Goldielover said…
Lycra goes back to the late 1950s, but I suspect it was rather later than that before it made economic sense to make jodhpurs from it.
13 February 2010 at 13:49

andrea.at.the.blue.door said…
By the nature of their construction, twill fabrics stretch a bit more than plain weave fabrics, so even before the advent of synthetic stretchy fabrics, cavalry twill would provide some stretch to a pair of jodhpurs. Additionally, wool is stretchier than cotton or linen, so a wool twill would be a good bet.

By the '70s synthetic fabrics were widely available, though my recollection is that they tended to be 100% synthetic; I suspect that some technical innovations were needed to get to the much nicer blends that we have today. I do *not* miss the 100% polyester double-knits of my youth!
26 February 2010 at 04:22

Anonymous said…
Hi
I'm trying to acquire a pattern for 'elephant ear' jodhpurs for a school production of 'A Midsummer Night's Dream' - our Puck is a 13 year old girl .
If anyone can help my email is s.tickle@merchanttaylors.com