Despite what you might be thinking, I have not forgotten my quest to scan the heights (or indeed the depths) of modern ponybookdom, and this is my latest. Alas my fellow reviewer has fallen by the wayside, though I am not too sad about this, as she has been distracted by Antonia Forest, one of my absolute favourite children's authors. Oh joy! Oh rapture! I rescued Autumn Term from a school library sell off and gave it to her, not expecting she would read it, as my track record for persuading her to read things I like is frankly, dismal. However, she trotted downstairs earlier in the week to ask if I had any more by AF? My joy was unrestrained (and for those who are interested, yes I do!)
Still, on to what this blog post is supposed to be about: K M Peyton's Minna's Quest. I came to this book with very high hopes: K M Peyton is one of my favourite authors. She has written probably one of the best pony books ever in Fly-by-Night, and a major contender for best recent pony book with Blind Beauty. 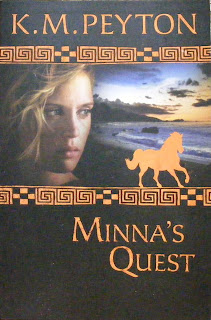 This book is set on the Essex coast opposite Mersea Island, when the Roman Empire was disintegrating after the death of Constantine. Minna, the book's heroine, lives in the fort of Othona with her parents and her brother Cerdic. The fort's centurion has recently died, and his son, Theo, has taken his place: he is inexperienced, but with an air of command. There is constant threat from pirates, and the fort's position on the sea makes it vulnerable to attack.
Many of K M Peyton's characters are outsiders, and Minna is no different. Her parents want her to settle down and marry someone good and sensible. She has other ideas entirely: the book opens with her rescuing a foal abandoned by the soldiery on the saltings. Like all Peyton heroines, she is a passionate soul: she fights for the foal's survival, and against all odds, and opposition, it survives. She develops a strong relationship with it, and this relationship in the end proves vital to the fort's survival.

Passionate Minna may be (she also has a passion for Theo) but she is not as convincing an outsider, or character, as many of K M Peyton's earlier creations. K M Peyton is wonderful at creating complex female characters; Ruth in Fly, and Tessa in Blind Beauty are both fine examples, wrestling with worlds that are to some extent alien to them. I don't think that Minna is quite in their league.

Her brother Cerdic, is initially the more unsympathetic of the siblings: he is selfish and thoughtless, and his only redeeming grace is his utter devotion to his dogs. Cerdic, though, changes throughout the story: the scene where he casts off his devotion to Fortis, his dog, in order to save the fort, is completely wrenching.

Minna doesn't undergo much of a journey as a character: she starts the book as a heroine, feisty, independent and brave, and ends up that way too. In a way, she's a typical romantic heroine (and she does have a passion for Theo, the centurion); she's unusual for a Peyton heroine in being described as physically attractive, with her flashing eyes. She would have been a more interesting character had her independence taken her into wilfully defying everyone and getting it wrong, but it doesn't.

Theo too, is rather too much the hero: good looking and brave; without the wilful self-destructiveness of Patrick Pennington, or Jonathan's introspection; he's a little like the Mr Darcy of Othona. The romance between the two doesn't convince me as much as say Jonathan's in The Last Ditch.

This, I think, is the main weakness of the book: it's oddly formulaic, a straight romantic read, which Peyton very rarely is. Despite that, the historical background is well done, and the Essex scenery as ever is wonderfully described. The story whirs you along: but the real dramatic tension and emotion are reserved for the sub-plot of Cerdic and his dog.

However, it's a good read, if not up to her normal standards, and I look foward to reading the sequel. I shall be interested to see exactly what K M Peyton does with Minna next - I'd rather like her simply to get something wrong.
Review

Jane Badger said…
Juliet - I thought of you while I read it, though the Island only features right at the end!
7 September 2008 at 11:21

Eliza said…
I could not for the life of me get into Blind Beauty, despite the raving reviews for it, but I'll have to give this one a shot.
8 September 2008 at 17:40

lizzy said…
i think this is the weeker of the three books in minnias story, i much prefered the second, no turning back , and the third , far from home, as in most of these she is away fomr home and the relationship with theo hots up abit , ahhh they are so perfect for each other!! but i was a bit dissaponted in the ebd of the third book, as i am i do often get dissaponted at endings! i want another one!!!!!!! i want to know wether theo lives and whther minnia goes home and what happens to draco, ohh i couldent stop thinking about this for a day after i finished hahaha i loved the books though
a good read for any reader though do read alll of them makes it more interesting!!! :D
12 January 2011 at 22:44