- April 08, 2008
Next on our list are three examples of the pony meets fantasy genre, all aimed at the 8-10s. Harry Potter has changed the face of children's book publishing, and now because fantasy sells, it is colliding with other genres. The fantastic and the horse in literature isn't new: in the pony book field Primrose Cumming's Silver Snaffles and John Thorburn's Hildebrand were out there in the 1930s with horses and ponies who talked. In the wider field of children's literature, Alan Garner created the wonderful unicorn in Elidor, and the black pony, vehicle of the Brollachan and one of the most memorably sinister creations in literature, in his Moon of Gomrath, and there are Bree and Hwin, two of my favourite talking horses, in C S Lewis' The Horse and His Boy.


Whether, without Harry Potter, pony books would have taken on fantasy is debatable. In the vast amount of titles published since the 1930s, very few could be described as fantasy. Michael Maguire's Mylor pair succeed because they leap straight into a fully realised fantastic world, and you are swept along by the power of the author's imagination. C Northcote Parkinson's Ponies Plot is more of a comedy: the fact the ponies talk is used to drive the humour rather than the plot.


With all of these titles, you do not sense the publisher standing over the author, suggesting that maybe a wizard here or there; a potion or two; perhaps flight, would all help sales. If you read today's blog titles, decide for yourself where the impetus for the fantastic came.


Elizabeth Lindsay: Magic Pony – A Dream Come True
Scholastic, 2004, £3.99
Elizabeth Lindsay's website
This didn’t fare well at all with my daughter. “The plot,” she announced firmly, “does not link

up.” I don’t think I’d reject it as definitely. There is a lot to like about this book. Ned, the magic pony, is a cheerful beastie with the convenient gift of being able to change size. There is a realistic heroine, a splendid quarrel between her and her brother and parents with entirely believable reactions to the large and steaming pile of muck Ned leaves on the landing. It's when the fantasy scrapes against the believable that the book loses me. If only Elizabeth Lindsay had resisted the temptation to have Natty’s first riding experience leaping on a miniature Ned down 14 stairs, cantering across the sitting room, with a little light jumping over Dad’s foot. I’d been hoping that the meshing of the real world of Natty and the fantasy one of Ned would have led to her learning to steer round her slippers, say. I think this is what Miranda meant: the fantastical parts are just too fantastical to mesh well with the rest of the book, and it is a shame, because otherwise it’s good.

An epic series of 12 books (soon to be 13), the heroine is Krista who has relatively normal pony

experiences most of the time, save for when Shining Star the magical pony appears, emerging “from a shimmering mist, swearing her to secrecy, bringing his wisdom and kindness into her world.”


Unfortunately Jenny Oldfield switches style from her usual straightforwardness to a mannered portentousness whenever the magical ponies appear. “Make haste,” one says. And “Our magic is needed in a land far from here.” This had the unhappy effect of making me start to cringe in anticipation whenever I thought a magical pony was due to appear. All I can say for Miranda is that she handed this back without a word; just a stony glare.


The story itself (Krista thinks she and her family will have to move away from everything she knows) is competent enough, but the fantasy fails. The best fantasy succeeds because it is often just the smallest shift from reality: but it is still completely recognisable. The magic ponies here simply don't work. Whether the horse can succeed as a literary expression of a nobility and morality higher than you find in everyday life I don't know: it doesn't here. True goodness and kindness don't need the kind of distant stuffiness the magical ponies drag about with them.

I have had this book for months, but put off reading it because I was so turned off by the cover.

I know these covers aren't directed at me (and neither is the website: tinkety tink it goes. Tinkety tink) but in some instances, and this is one, the bland cuteness of the cover illustration cheapens what is within.


This is a far better book than the cover would have you believe. It was a surprise to us both. Miranda, having read the other fantasy/pony titles, was not expecting much. "The unicorn bit," she said, "wasn't too over the top. I liked the fact not everybody had a horse, because usually in this sort of book everyone does, and that made it more real. I would probably read another." Well, I think I would too, even though I am missing its target market by about 40 years.


Lauren owns Twilight, a grey pony who is in fact a unicorn. His unicorn status has to be kept from the world, and the problems of doing this give the books some of their plot tension. Miranda has a good point when she says this book is real: despite the unicorn element, it is. The relationships between the children are well and sensitively described. The books are rather more about the characters' experiences at home and school than they are about ponies: the first is about adjusting to a new stepmother and stepsister, and the second about bullies and the fears of the very young. 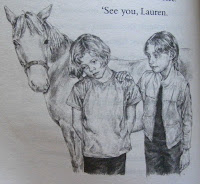 The internal illustrations are, when it comes, to humans, fantastic. I wish, though, that the artist (Biz Hull) had as much skill depicting horses as he does people. It is such a shame they fall short, but I am delighted that Puffin are including illustrations, and making a break from the sub Nick Sharratt style.

So, much to my surprise, Linda Chapman was our favourite in this section. It would be interesting to see what she could do if she tried something for the older market.
Review

Susan in Boston said…
One out of three isn't too bad, given what you've got to work with these days!

I agree re cover art....when they all look so awful, how can you tell? Claire Birch did an excellent series in the 90s called (ridiculously) the Galloping Detective...the cover art was uniformly poor (though perhaps not quite as bad as the unicorn).

I spotted the first book in the series, Triple Hoax, in a local bookstore, and let it lay there for at least a year (nobody else was inspired to pick it up either), then one day, with a bit of a credit on the books, and in the mood for a risk, picked it up. Shockingly, it was excellent...both the mystery and the horse element.

Jane Badger said…
I've heard Tanith Lee is good, but never read anything by her. Off to find a copy of The Black Unicorn now!

As far as cover art goes, I know these books are aimed to appeal to children, but interestingly I have two new Jessie Haas hardbacks which are in the traditional mould, and these I found my daughter curled up with, without being prompted!
24 April 2008 at 09:04