- November 03, 2016
It’s been a while. It’s been a long while, but Caroline Akrill is back. After writing the best-selling Eventers’ Trilogy and a raft of other sharply observed and witty horse stories (not words that often go together) Caroline went off to do Other Things, like run J A Allen equestrian publishers, and run a hotel.

The hotel obviously provided rich comic fodder, much of which has surfaced in this book. Her first book for adults, it is a gloriously sweary, brilliant, vital read, which moves effortlessly from the comic to the dark and on to the romantic. 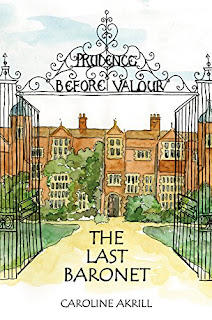 Set in the 1980s, when new money had not yet rushed through the world of the English country house and refurbished it, Rushbroke Hall has reached a state of almost terminal decline, reeking with rot, roof timbers open to the skies. Its owner, Sir Vivian Rushbroke, is in hock to the bank for staggering, sick-making sums of money. Rushbroke Hall needs a saviour, and it finds one in the unexpected form of Anna, a chef. A chef with secrets. And a legacy, which she is determined to invest in Rushbrooke Hall by turning it into a hotel.

Everything is focused on opening the hotel for Christmas, and interlaced with the increasingly desperate attempts to sort the house out are the stories of the guests. Akrill’s earlier books are notable for their rich mix of galloping eccentrics and you will find plenty of them here. A rich widow with a family that turns out to be dogs. An accountant desperate to escape, just once, the kindly meant but stultifying Christmases he suffers each year. A businessman dressed in the finest and most splendid hunting clothes whose first riding lesson takes place on a gypsy cob. And Henry Lamb. I particularly loved Henry Lamb, the antiquarian bookseller with a heart of pure, and concentrated murder.

And there are horses. Sir Vivian’s daughter, Nicola, runs one of those schooling operations that exists on a shoestring.

I absolutely loved this book. It made me laugh. It made me cry. I loved the mixture of sweariness mixed with quotations from the King James version of the Bible (Sir Vivian is a fan). I loved the fact that although there is romance, it doesn’t (thank the Lord) follow the traditional romance plot. I loved the dark comedy of it all; the brilliance of the dialogue and the sharpness of the characterisation. Akrill has lost nothing while she has been away.


Paperback due December 2016 (not sure if this will be available in the US or not. I'll try and find out).
Review

Jane Badger said…
The book's available in Kindle format in the US Fran, and I've put up a link for it. Whether the paperback will be, I do not know. I'll try and find out.

SarahB said…
Ohhh - I loved the Kindle free sample. Now have to decide whether I can wait until December to get a proper book or whether I will succumb and buy the Kindle version!
4 November 2016 at 18:59

KathyS said…
I downloaded kindle version of this book on the strength of your review, and was not disappointed! It was thoroughly entertaining, well written and a delight to read. So thank you for recommending it!
21 November 2016 at 21:22

Jane Badger said…
My pleasure - I am glad you enjoyed it. There's always that slight worry when you review something that you might actually be the only person who thinks as you do, but I thought I was on pretty safe ground with this book!
23 November 2016 at 09:01

Caroline Akrill said…
Thanks a million for your enthusiasm for The Last Baronet, and the lovely reviews. This is such a confidence boost! Just to let you know that the paperback is now published and available from Amazon.
25 November 2016 at 18:22