- October 08, 2010
The National School of Equitation in Roehampton (it was at 139 Roehampton Vale, London SW15, but now seems to have been replaced by either Kingston University or a golf course) was a regular advertiser in the early issues of Riding Magazine. It was obviously hard to miss, even from the air. 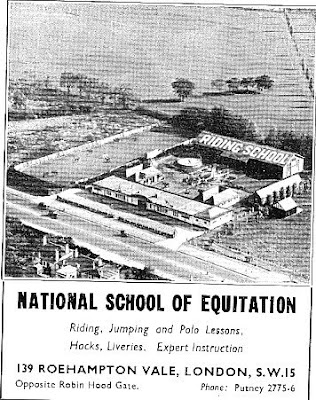 The National School started the sport of polocrosse, as an exercise for its young riders. The game was played indoors with two players per side, with sticks made from old polo sticks with the mallet end replaced with a squash racket head with a net. To score a goal you had to scoop the ball up from the field and drop it in the goal. The game was brought to Australia in 1938, and the Australians picked it up and ran with it, as you can see in the video at the end of the piece. Here in England, matters remained much more sedate. The National School of Equitation's first attempts at advertising the new sport in March 1938 were a tad stilted: none of those ponies look to have moved for at least the last half an hour. 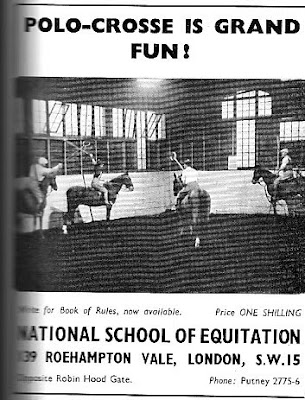 It's such grand fun everyone's been petrified. Things did improve, and by May 1938, there was a little more action: 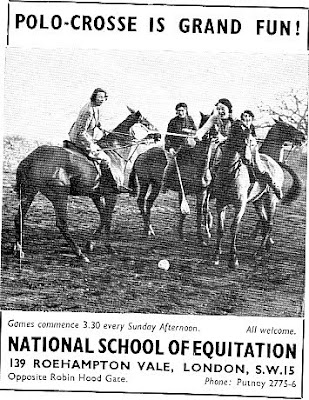 Polocrosse now looks like this clip below - before you watch it, all horses and riders do survive, though the video is quite alarming at times! Apologies for the fact this video slipped off the first draft. Not quite sure what happened there.
The Horse - Polocrosse

Anonymous said…
I always see the word "polocrosse" and think I should investigate, but never do. Thank you for this! I loved lacrosse at school so always assume that I'd adore this sport.
8 October 2010 at 09:16

Anonymous said…
These photos also finally explain the mystery of the cover illustrations for the Mallory Towers editions I read as a girl. Daryl's lacrosse stick looked like a fishing net. Now I know – it was a polocrosse stick!
8 October 2010 at 09:21

Jane Badger said…
I didn't play lacrosse at school so have no idea if it's as violent as the video clip, which got missed off the post. Not entirely sure where it went, but I've put it back now! It's a pity Enid Blyton has not been acknowledged as the founding Mother of the sport.
8 October 2010 at 09:53

Anonymous said…
It is indeed violent. Men play with helmets and pads, the saps.
At university there was a "mixed lacrosse" league, and one day my mother and godmother came to visit. My godmother, a notoriusly aggressive goalie in her time, took to the pitch and performed several tackles which had been made illegal since her schooldays. The boys, who didn't really know how to play and were used to just outrunning us girls carrying stick and ball like an egg and spoon, didn't know what hit them.
8 October 2010 at 10:23

Anonymous said…
Having now watched the video, I think I might stick to unmounted lacrosse. At least it's only me that gets concussed that way.
8 October 2010 at 12:42

Sue Howes said…
Wow!
The ponies seem to be enjoying it, and watching it for the second time I think I know why. My pony Jack plays just like this out in the field. Bouncing, turning on a sixpence, galloping wildly along. Maybe to the ponies it's just one long bout of Fun.
Although they do have to cope with a lump of a human weighing them down and occasionally pulling them over, and/or falling off.
A friend of mine has just bought an ex-polo pony for a hack. He has some odd dents in his shoulder, presumably from barging about in the pack, and is terrified of bushes, having been used to the open polo field.
10 October 2010 at 09:01

Jane Badger said…
Mind you, I know some non polo ponies who are terrified of bushes, to say nothing of those really creepy lines people paint on the road where it needs mending.
11 October 2010 at 11:12

madwippitt said…
Enjoyed the comments above! We tried lacrosse once at school ... just the once and the PE teacher retired it from the 'lets try some new sports' list in terror. We tried baseball next which wasn't much safer in our hands :-) God knows where she'd acquired the ancient lacrosse sticks from.

Angela KUKLA said…
HI, I'm from AUstralia and i played polocrosse for several years at c grade. maybe i can explain some basics for you. there are two shifts of three players that play alternerate chukkas- so six memebr of a team who play for six minutes then rest while the other half of their team plays. theres a goal attack, a centre and a goal defence. the ball cannot be in your possesion when you pass over the line into the goal area and so if on a flow the goal attack usuallly gallops down, bounces, 'traps' the ball and shoots the goal in fast succession. it is the job of goal defence to get between the shooter and the goal to thwart this. you cannot cross in front of players following the ball and you cannot swing the ball in your raquet over the midline of your horse to evade other players. You may strike another players raquet to try and dislodge the ball but you cannot 'windmill' the raquet. No stallions are allowed and no bits with straight bars on the cheek pieces. usually we use plain snaffles and the horses actively love following the ball and out manoevering each other. a good horse is very responsive and thick set in order to push and shove over horses around, we teach them at a walk to push against another horse then let them 'win' with lots of praise so they learn to enjoy it. hope this helps! Its a cheaper sport than polo because you only need one horse and tournaments usually last over a two day weekend so theres a lot of socialising with other players on a saturday night. Its like demo darby on horseback with a lot of raquet skill so its huge fun and when you are concentrating on the ball you dont realise how fast you are going. Galloping down a field and bouncing and trapping the ball repeatively for the first time is a huge rush!

Jane Badger said…
Thanks Angela - that's fascinating! And it sounds great. If you don't mind, I'd love to post what you've said on the FB page as many of my followers in the UK would I'm sure be interested.
6 June 2019 at 13:05